I awoke to find a new arrival moored next to me. A chartered Bavaria with a Polish crew. They insisted I have a traditional Polish breakfast with them and welcomed me aboard their yacht. One black coffee and several shots of Metaxa later (what is Polish about that?), I managed to escape their hospitality and spent the day playing tourist in Zakinthos.
The all-male Polish crew next door was a cheerful collection of professionals. Eight in total, two proudly boasted that they worked for the biggest brown coal power station in Europe, another was a construction tycoon and the youngest at 22 touted the success of his families business in disposable plastics. I don’t remember the rest. They regularly went cruising together and had been sailing around the Peloponnese clockwise from Athens.
Upon returning to Eileen, I was invited yet again for a traditional Polish lunch. Unable to refuse the hospitality I nursed a dizzy head that night. By morning they were gone. 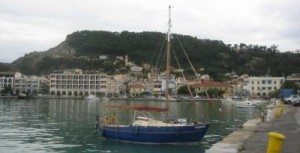 Day 7
The storm that had been following me from the north arrived so I opted for a rest day.
As the winds rose I realised that my attempt at Greek style mooring wasn’t as exemplary as I’d initially thought so I gave it another try with considerably more scope. Much better!
I restocked Eileen with fuel (carrying jerry cans to the nearest service station) and water (borrowed from an unattended Italian super yachts berth).

Wetsuit on, hull scraper in hand, I leaped into the water for my morning chore, barnacle banishment! All went according to plan until I lost a fin and it sank. Not normally a problem, but in a 7mm wetsuit, no weight-belt and one fin, it’s not easy to stay submerged. I eventually managed by pulling myself down the anchor chain, lifting the anchor and carrying it to the recalcitrant fin. 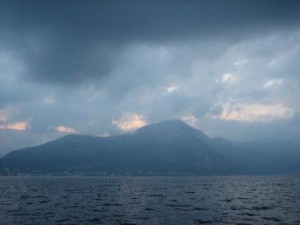 Then it was off to Zakinthos via the straight between Levkas and Nisis Meganisi, East of Nisis Arkoudhion and Ithaki, the home of legendary Odysseus. Ominous clouds hung over mountainous Kefallinia at dusk. To the north the VHF announced continuing gales in the Adriatic and northern Ionian. I urged Eileen of Avoca onwards for the remaining 20 miles watching lightning brighten the northern skyline.
By 10pm I found safety in the large and lively port of Zakinthos. The city was throbbing with nightlife, but all I was concerned about was finding an appropriate berth. After attracting the unfortunate attention of some youths with a high powered green laser (This could be quite effective in making sure ships notice you!), I dropped my Danforth from the stern and let out just enough scope to allow me to step onto the quay and tie off. Not so shabby for my first attempt at mooring Greek style!