I want to talk about pirates… It’s bound to find me a willing audience and no sailor worth his salt (in yarn telling) is without a repertoire of at least three life threatening pirate encounters.

I am admittedly somewhat inspired by a relatively recent report I’d read on noonsite.

Riveting stuff, but I can’t help making comparisons with what I’ve encountered on a regular basis, both within and well outside the area indicated by the report.

Fishing vessels have a habit of intercepting sailing yachts at sea. Sometimes its intentional, sometimes it’s not. Often it’s curiosity, but if you’ve ever seen how fishing vessels zigzag at sea, it’s really no surprise that they appear (at some stage or another), to be on a collision course.

So when a sailor says “This guy altered course as well … bearing and track to meet ours … I altered a bit more … he adjusted to intercept our line of travel … very odd!”

In fact, this isn’t odd at all…

So on the basis of a fishing vessel seen on an intercept course and lights that flash at night, we have gone from “odd” to

“I felt something was not right here … “

Off Suriname fishermen use flashing lights to mark their nets. Frustrating because you have no idea which way to pass them, but it’s certainly not peculiar. In these waters, vessels will momentarily shine a light (sometimes just a torch, sometimes their mobile phone) if they see another vessel close by. It’s how they let you know they are there… Their boats are not equipped with navigation lights or radar reflectors for that matter.

But behold… further proof that something was amiss…

“at which point I turned on the engines, swung around and headed straight out to sea …

Could they now be busy bringing in their nets?

Of course all rational thought goes out the window, especially when you’re physically and mentally exhausted…

“I went downstairs and fetched the flare gun …”

Is it just me or do others suspect that there has been a sudden quantum leap in irrational behavior here? 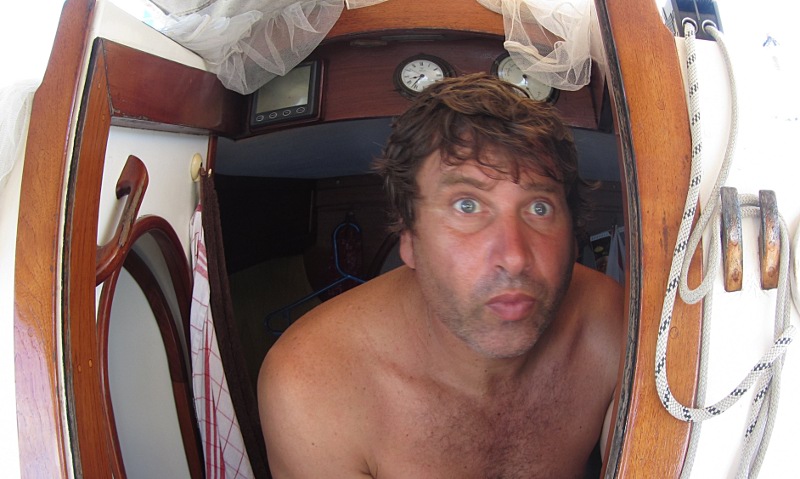 Did you say pirates???

Let me digress now and tell the story of my latest 6 day trip to Tobago.

On day five (the rest isn’t worth recounting), at 4am in the morning, I found myself in surprisingly similar circumstances.

I’d seen the lights of several fishing vessels the previous evening and 100NM out from Venezuela, I found a vessel rapidly closing in on Eileen’s stern.

After unsuccessfully hailing the crew on VHF 16, I sat watching it’s approach. I did not however fetch the flare gun…

When the boat was within a few cables it abruptly veered to port to… to… to….

No pirate paraphernalia such as grappling hooks or waving Kalashnikov’s materialized, all I got was a good look at their fishing gear…

That they did not respond to my calls on VHF is not so unusual. Even fellow yachtsmen with fancy HF and VHF equipment entertain the bizarre habit of keeping them switch off.

Which takes us back to….

“vessel approaching, we have to assume your intention is to do harm … we will have to take action against you … please alter course now … they did not … I took aim with my flare gun and fired “

“Their engines roared as they turned to port and disappeared like a bat out of hell!”

On my last day out from Tobago another fishing vessel approached Eileen on an “intercept” course. This time it was during daylight hours, so I was able to take a nice snapshot for the blog. When the boat was within a few cables, my VHF radio came to life (Note that I leave mine on despite the drain on the batteries).

Fisherman: “Little boat, this is Rebel Lady, are you alright?”

Eileen: “Yes everything is fine thank you.”

Fisherman: “Just came over to check. That’s one small boat you have there. Where are you headed?”