Eileen of Avoca was ready to go, but a heavy swell made exiting Fiumicino (a distributary branch of the Tiber River) dangerous if not impossible (see photo).

I spent the next couple of days preparing for my trip, stocking up on delectable local produce and reconnoitering the river’s mouth to gauge the height of the breakers. Despite having traveled more than 1000km unnecessarily, I was pleased to have kept the car. It enabled me to revisit Ostia and the many venues nearby that I’d come to know over the Christmas New Years holiday period.

A short but adrenaline packed solo hop from Ostia to Fiumicino. The previous day’s heavy rain coupled with winds from the west made for the occasional heart-stopping breaker in the following sea that accompanied me as I motored toward the rivers entrance.

Eva had taken the car to meet me at the yard where Eileen would be hauled out to spend the rest of the winter (see: www.deltaitaliasrl.it).

Several hours later and 900 Euros poorer (for 4 months dry storage), we set out on our return drive to Belgium. Time to get back to work and save for the next sailing adventure. 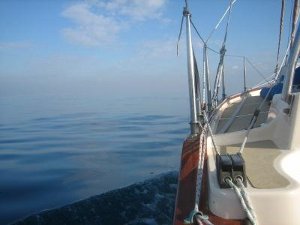 It started to rain. Rummaging about in the lockers I found the large green canvas I generally use as a shade. Tonight it would serve; rather poorly as it turned out; as my water-resistant blanket.

Eileen motored on through the night. The only other vessel to be seen was the scheduled ferry passing well to the North on its way to the mainland in the wee hours of the morning.

By daybreak (Christmas day) the swell and wind had vanished and we made good progress (5kts ENE) on a smooth sea. The crew was feeling better so it was time to open presents. I am now the proud owner of a captains hat two sizes too large. Well at least there is room to grow.

By 3pm we had arrived at the new marina in Ostia the ancient port city of Rome. I’d tried my luck at some fishing on route, but true to form (I’d been trying to catch a fish all season) I came up empty handed. My fishing prowess has become the running joke with friends and family so my New Year’s resolution will be to reveal my currently latent fisherman’s skill.

Any and all tips greatly appreciated.

Ostia itself is not much to look at but there are good connections to Rome and the marina area is excellent (www.portoturisticodiroma.net), Transiting yachts: 13 Euro a night from October to March but 33 Euro in July and August.

Locals pack the boulevard on their nightly promenade and there are a multitude of restaurants and boutiques close at hand. Enough to keep Eva content as we sat out another round of bad weather just after New Years Eve.

The big night was spent in Rome and Eileen of Avoca served splendidly as our hotel for the remainder of our stay.