By 11pm I’d rested enough to brave the next leg. In light variable winds Eileen left Chalkis’ pretty little bay and we made our way NW toward Tylos. Rounding Chalkis’ eastern coast, a brisk westerly breeze had Eileen of Avoca zipping along at 4 to 4.5 kts. Four knots is a good speed for a Yarmouth23 and unless I want to play around with the topsail (something I never do at night) I don’t expect much more speed from her without motor sailing.

Less pleasant conditions arrived with the dawn. A one knot north setting current between Tylos and Nisyros made for a wet ride against the NW winds but it did not last. By the time I’d changed course to the NE (toward the eastern tip of Kos) the wind had eased.

Later that morning, several other boats appeared from the west and it did not take long to realize that Eileen was now part of the impromptu race for a berth at Kos marina. Time to hoist the iron topsail… (i.e. start the engine) and get that extra knot or two. A Yarmouth23 motor sailing in light winds can do over 6 knots so they didn’t catch me… nah nah, na nahh nahhh… (said with infantile gusto). Must also have been the sleep deprivation 😉

By morning I’d been overtaken by my flotilla partner and Chalki hove into view. What a splendid little stopover. Since the jetty was crowded (well it is August), I rafted up with the boats at anchor. Considerably more chain is required to anchor with enough scope here (15-20m depth), but by 9am the charter boats moved on and I inelegantly made fast to the pontoon.

Dropping the Danforth (with 10m of chain) over the stern I motored to within a meter of the pontoon gently easing out the line. This generally works a treat, except when there isn’t enough line… Must have been the sleep deprivation 😉 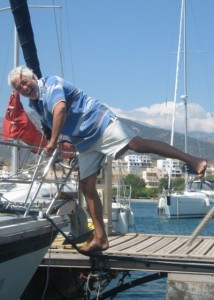 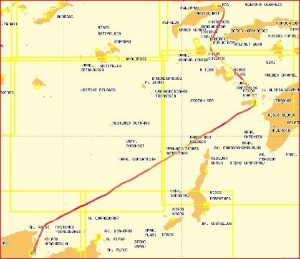