Chasing a fresh supply of French wines had me running late for my planned 3pm departure from Camaret (to catch the appropriate tidal stream through the “Chenal du Four”), but I still managed to be the first of several yachts converging on “Pointe de St-Mathieu” for the turn of the tide. A few south bound stragglers rounded “Les Vieux Moines” as I approached, and surprisingly, one even stopped to say hello.

It was Damian from Dartmouth on his yacht Simba. I’d met Damian in La Coruna crewing for Riviera Magic, and here he was again sailing his own yacht to Camaret. Small world! I wonder who else I’ll chance upon at sea when sailing back to Portugal in July.

Despite Damian’s warnings of dense fog off Ouessant (also broadcast in a special bulletin on VHF 16), I decided to risk the poor visibility in order to reach England before even worse weather arrived.

My plan was to be well clear of the tidal stream in ‘le Four’ before a forecast breeze of 10 to 15kts veered north. Three other yachts apparently had the same idea as they quickly motor-sailed past Eileen despite my best efforts to maintain our top speed of 5 to 6kts. Shortly after overtaking us, the yachts disappeared into a broadening bank of gray mist to the north.

The forecast northerlies and the fog arrived early, making for an uncomfortably wet ride through mist on agitated seas, but fortunately the disagreeable conditions were short lived.

Curiously, (as the visibility improved), I found that the yachts that had previously overtaken us (off St. Mathew), were now behind us… In just 20 minutes, Eileen of Avoca had outdistanced the lot!

How we managed to pass everyone in the fog remains a complete mystery. I can only imagine that cloaked in heavy mist Eileen must have felt brazen enough to lift her seaweed ruffles and make a dash for the lead while nobody was looking. 🙂

Thirty hours later I found myself off Start Point enjoying the sunset on my approach to Dartmouth. With Eileen’s lackadaisical pace, I get to see a lot of sunsets, something I’m sure only other Yarmouth23 owners can truly appreciate.

‘Enjoy your sunsets at sea with a Yarmouth23’ ought to appear on the sales literature.

A synonym for ‘don’t count on getting to port before dark in a 23ft gaffer that weighs almost three tons!’ 😉

But at least I arrived in Dartmouth safely!

My night approach to Camaret in light mist and flat seas was also uneventful. With no moon, it was too dark to see the events!

But never fear… the hand-held chart plotter is here…

Ah, the wonders of chart plotters. Just follow the dotted transit line and you arrive safely in port despite not being able to see a thing.

Somehow I can’t help but think of it as cheating, but chart plotters really do make for ultra safe sailing. Now if I can add an AIS receiver to my list of electronic goodies I might be able to do nothing but sleep while passage making. 🙂

And why stop there? Hook up enough of that modern electronic gadgetry (as seen on many larger yachts) and I can even stay at home watching TV (not that I have either one or the other at the moment), while Eileen safely sails herself to wherever I fancy…

But then I’d have to mow the lawn again on weekends….On second thought, perhaps I’ll draw the line at just installing an AIS receiver and keep playing sailor. 🙂 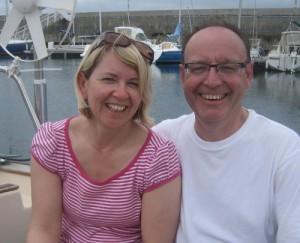 Eileen of Avoca featured in Camaret for one night only!

I came, I refueled, I loaned my harness to the crew of Erimar (who were unsuccessfully playing piniata with a boat hook and wayward halyard), I checked the weather, I bought a few bottles of French wine, I drank a bon voyage glass of Zoco with the aforementioned crew of Erimar…. I left…