Squall at sea off Recife, Brazil

A week at sea battling contrary winds to return to Cabedelo, ten days to recover and another three days on the water before reaching Marina Park, Fortaleza.

Not that there was much recovering going on in Jacare! The place was infested with sand flies (no-seeums, gnats or what ever else you want to call them). All boats were affected, including those at anchor, despite mosquito netting (they are small enough to get through the mesh). After several nights of playing host to the creepy crawlies, no sailor was feeling particularly rested.

For entertainment, we’d compare ‘war wounds’ each morning and complain about the incessant rain! For me, one visit to Jacare is more than enough, and if it had not been for the excellent company of fellow yachtsmen, I’d have left almost immediately. 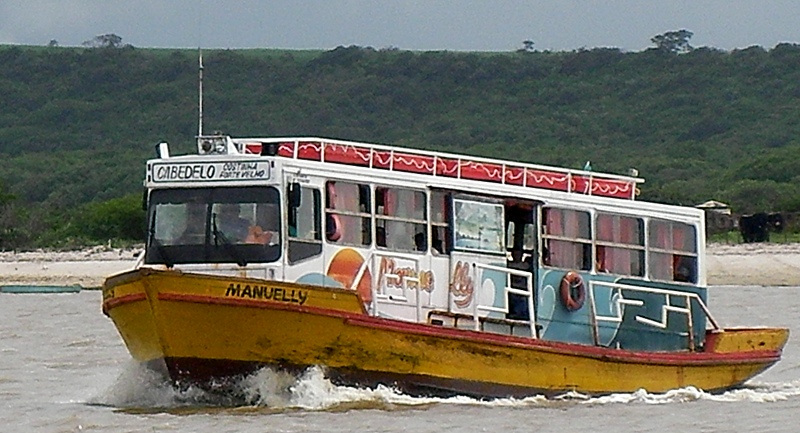 Suggestion for sailors visiting northern Brazil via Fernando de Noronha: Head directly for Salvador so you only have to contend with ‘bad sax’ and this part of the coast once. 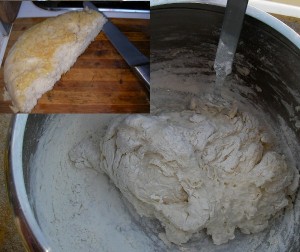 Making bread in a pressure cooker

I’d wanted to stop at various small ports along the way, but few are safe to enter in anything other than perfect conditions.

Besides, it’s taken me three days to regain my “sea legs” and I’m not going through that process again any time soon if I can help it.

It’s been the usual uneventful solitary affair at sea. Cruising 20 to 30 miles offshore, Brazil is out of sight. The only reminder that I’m not too far from civilization is the reflection of city lights upon an ever present band of cloud to the west.

I’ve been feeling somewhat melancholy since leaving Salvador and I’m not particularly sure why this is. Am I suffering from the anticlimax to “great expectations”? Perhaps… It could also be that watching the cricket all day isn’t my thing…

It’s true that no crowd of teary eyed maidens came to wave goodbye upon my departure but my expectations weren’t that great! Three or four would have been enough. 😉

Fantasies aside, I happily (forcibly) settled for the maiden-less cacophony of ships horns sounding from my marina neighbors as I made way in Eileen. It was a fabulous substitute send off guys… Thanks!

No, I suspect that freedom itself breeds melancholy. With no social ties or responsibilities and nothing but the vague objective of sailing westward in mind, it’s easy to feel emotionally adrift, oscillating between euphoria and a mild despondence.

As long as the oscillations don’t increase in amplitude or frequency I should be fine, but if ever you come across someone who laughs and cries in the same sentence, it’s a sure bet he’s done too much single-handed sailing!

I’ve no idea what the long term psychological effects of DIY bathroom renovations or mowing lawns on weekends is but it frightens me, so for now I’ll stick with the potential hardships of sailing while emotionally adrift… 🙂

After three dreary days of sailing west from Fernando de Noronha, I finally arrived in mainland Brazil. Twenty days to sail across the Atlantic in a 23ft boat? Voila, all done!

I’ve been loafing about Jacare for the past week, which is several miles up the river from Cabedelo, which in turn, is just north of Joao Pessoa.

Never heard of these places? Me neither!

Until now it’s been a well kept secret among French speaking sailors requiring an inexpensive safe haven for leaving their yacht for extended periods.

Jacare itself has little to offer international visitors, but locals still regularly flock to it’s one claim to fame (just a stones throw away from the tiny marina), Bolero by sunset!  Every night hundreds of Brazilian tourists gather by the riverside developments to watch the sunset and listen to Ravel’s Bolero accompanied by a saxophonist standing in the prow of a small fishing boat. Apparently he’s quite a celebrity, whose musical accomplishments have spawned several copycat sunset serenade gigs in cities across Brazil.

Not my thing, but the story behind the commercial hype is worth mentioning.

Many years ago, a visiting Dutch yachtsman anchoring nearby made a habit of playing Ravel’s Bolero every evening. Why? Who knows! Perhaps he was fond of the movie “10” staring 80s supermodel Bo Derek, (that would be about the right era).

Don’t know what I’m talking about? Then try this link. 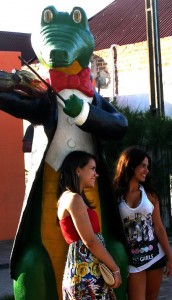 At any rate, a local fisherman enjoyed listening to these nightly serenades so much that before the sailor left he asked for a copy of the tape (yes it was in the days of cassette decks) and continued what was fast becoming a Jacare sunset tradition.

The current amateur saxophonist came later, but he is the one that has truly capitalized on the idea.

Given that he has played the same (somewhat repetitive) piece every night for umpteen many years, you’d be within your rights to expect a less dissonant performance.

But why bother with complaining?

Yes… it’s bad sax at sunset in Jacare, but nobody here cares.

For three hours the promenade is a hive of activity and who in their right mind wouldn’t want to have their photo taken by a musical concrete crocodile?

Despite the ever expanding kitsch of modern tourist development, Jacare retains much of its quaint sleepy fishing village feel. If rest is what you seek (following your Atlantic crossing), then you can’t go wrong by stopping here. The family atmosphere amongst those staying at the marina is rare (if not unique) and as a bonus, it’s safe for the whole family to wander about at all hours. Some sailors are so content here that they haven’t bothered to budge in over five months! What more of an endorsement can a small village marina get?

Having failed miserably to meet a suitably attractive reason to linger, 😉 I’ve optimistically set my sights on reaching beautiful bustling Salvador (which should take me about 6 days). So, until then, I leave you to view my most recent holiday images. 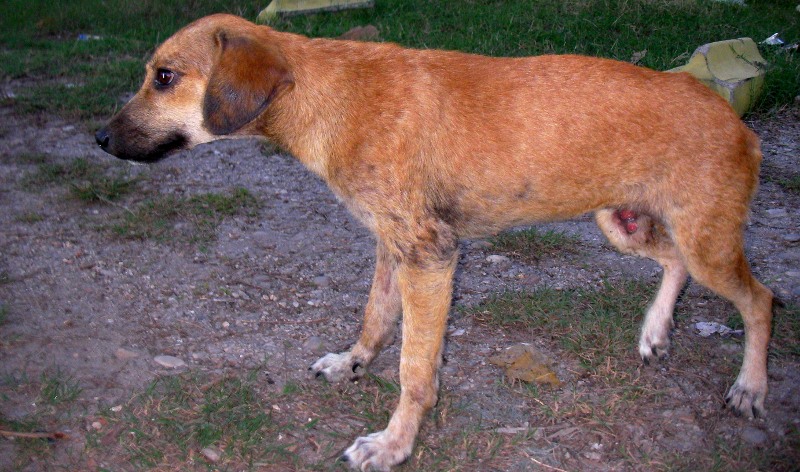 Introducing Titute, the newly adopted marina mascot. This poor little bitch suffered a broken a leg in an accident and the previous owners dealt with the problem by unceremoniously dumping her in the river to drown. 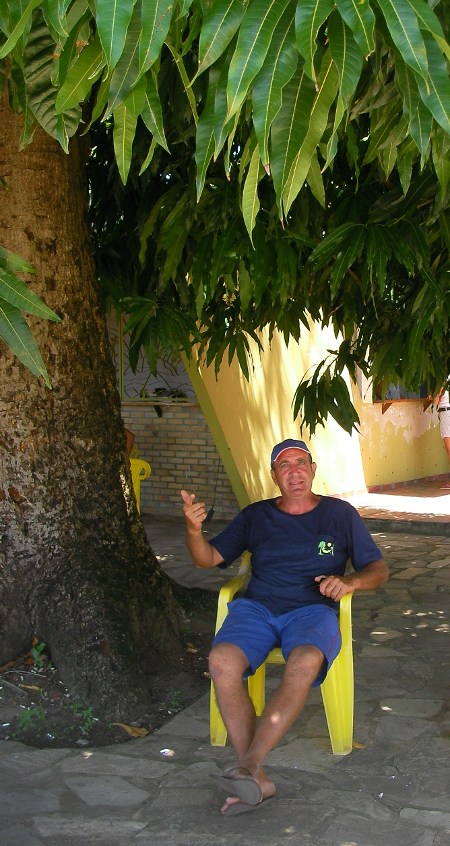 Luckily this man was on hand to rescue the drowning puppy, and with the help of antibiotics and pet food donated by resident sailors, she has made a remarkable recovery. Unfortunately, nobody dared, (or knew enough), to set the broken leg correctly so it is now almost useless, but a collection is underway to raise the funds needed to have her leg seen to by a vet. Even if she remains a three-legged canine, at least Titute has found a new home. 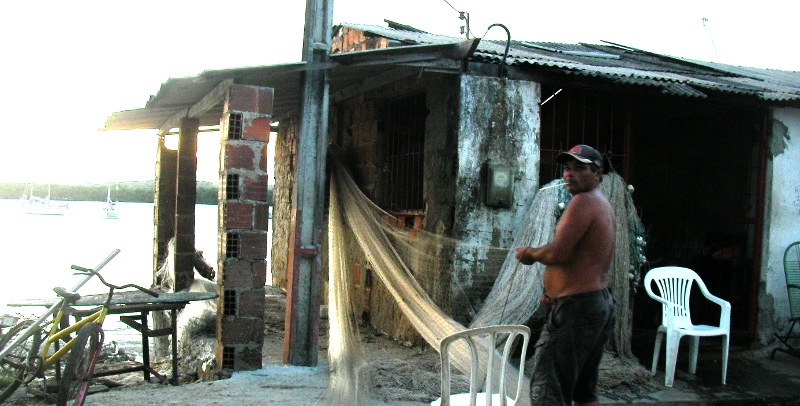 As stated earlier, despite recent developments, Jacare retains its sleepy village atmosphere. You can sit watching local fishermen repair their nets, while children busy themselves tending their own charges. 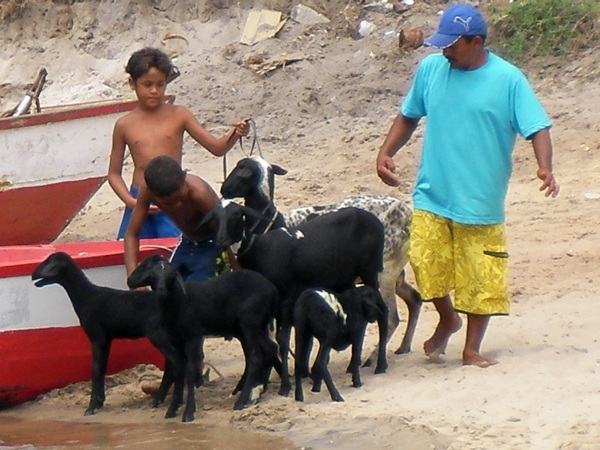 Brazil is clearly a country of striking contrasts. Rich, poor, modern or seriously outdated, it’s all on display here. 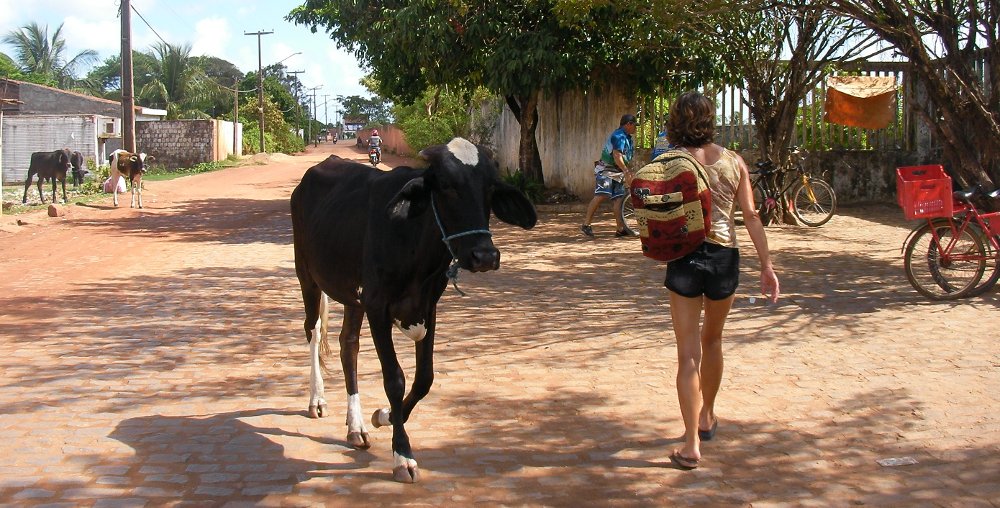 One minute you’re sharing an unpaved road with wandering livestock near a shanty town, 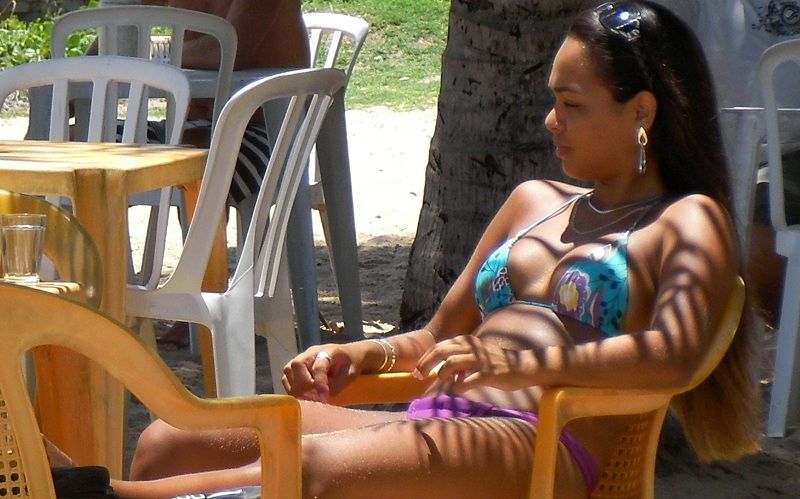 Working on maintaining that tan

while the next you’re hobnobbing it with the well to do, improving your tan by the sea. All this within just a few city blocks! 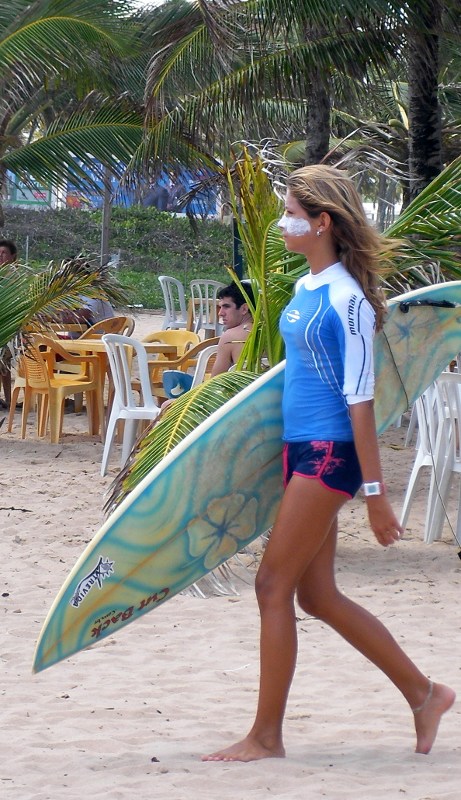 Unsurprisingly, the nouveau-rich youth surf culture appears somewhat contrived… (especially when there is no surf… just surf boards and surfers). It almost looks as if everybody is reenacting b-grade Australian TV soaps from the 70s… Who uses zinc cream on their nose these days!!! 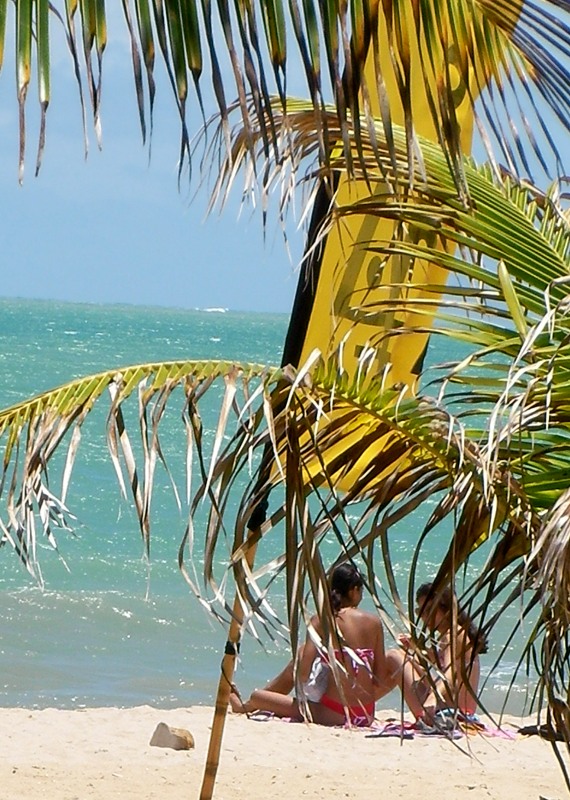 What to do while at the beach?

Mind you, the Brazilians can teach Australians a thing or two on how to appreciate a day on the beach…

Hang out at a palm shaded beach bar!

With a beach bar of course… Even in Holland this is a mandatory feature that’s strangely absent in Aussie surf culture. 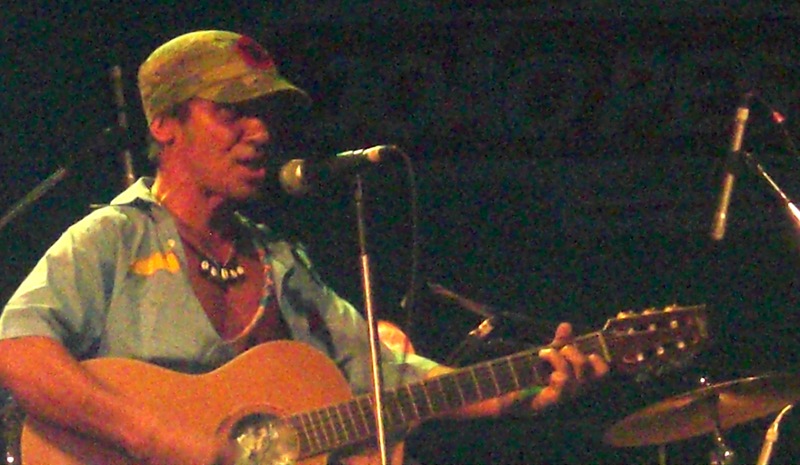 And why not have free beach concerts on weekends like they do here? Manu Chao live in Joao Pessoa this Sunday night. Beat that! 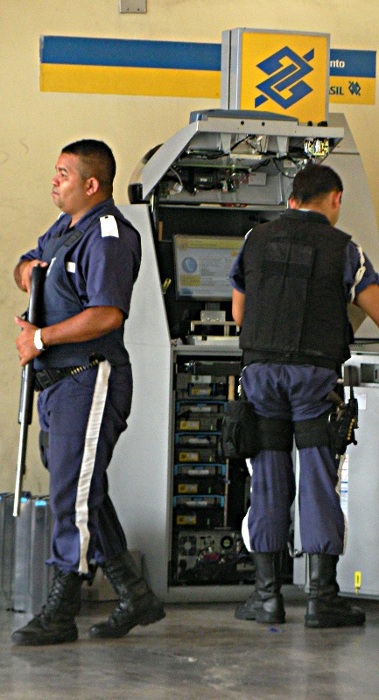 Can I make a withdrawal?

Not that everything is perfect here in paradise. Look how hard it is to get money from an automatic teller machine… 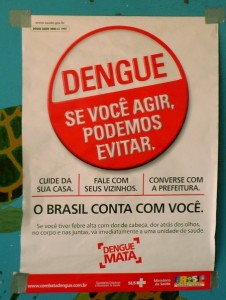 How to avoid Dengue Fever 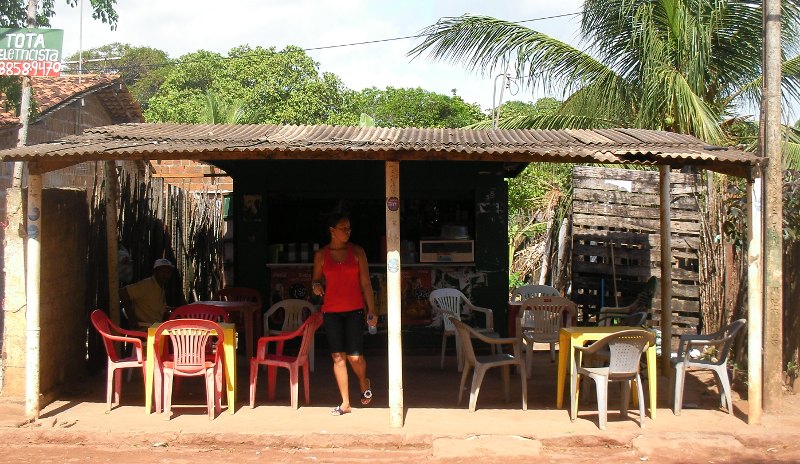 It's a bustling busy life!

Despite this, I can’t understand why so many sailors race to the Caribbean when there is so much to see and do further south.

It's cattle class for me on the local train...

Look how easy (and cheap at 25 cents) it is to get around using local transport, 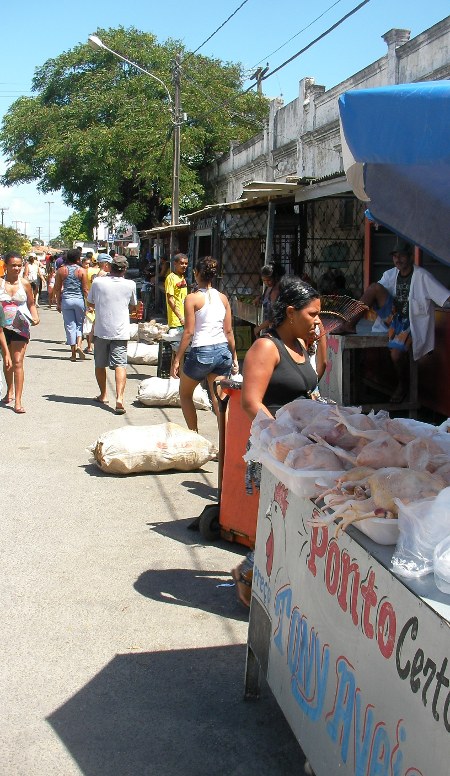 and you have got to love it when even shopping for simple provisions is an adventure in itself.

I like Brazil… so for now, Trinidad and the Caribbean can wait.