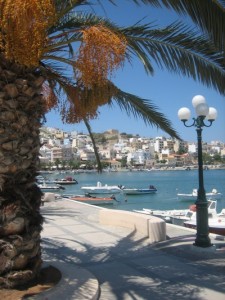 I’ve hired a car to stave off cabin fever and excessive skin wrinkling (due to too much time spent in the jacuzzi).

A morning spent diving to scrub the hull, lunch in sleepy Sitia, (much to the delight of the local restaurant strays whose plaintive feline cries I can never deny), then on to revisit Itanos beach Erimoupouli (where I had sheltered from last years gale).

Oh the joys of car air-conditioning. Had so much fun (more praise to ye almighty air-conditioner), it’s off to Irapetra in the South tomorrow.

It was a pleasant flight from Brussels to Athens, and the hot meal served on my Olympic Airlines flight was memorably delectable. What I’d rather not have remembered was enduring the subsequent six hour wait for my connecting flight (obviously set as penance for daring to enjoy the trip). Conspiracy theorists will claim that poor connections are all arranged so you spend exorbitant amounts for food, transport and accommodation in what ever city you find yourself stranded. If so, the plan is awry as I encountered many a like minded sleep deprived miser aimlessly wandering the terminal during the wee hours determined to shun the hoteliers and merchants neon lit temptations.

At 5am I ceased my somnambulation and boarded my connection for Heraklion Crete. At repose, cup of coffee in hand, I prodded the dense unyielding rubberized pastry offered as an in-flight snack with appalled fascination. If only my previous leg had not raised such culinary expectations.

With a haggard look (most probably caused by indigestion as my stomach convulsed in vain attempts to assimilate the aforesaid pastry) I passed the H1N1 thermal imaging camera test for the second time that day, and dragged my luggage out of the terminal in search of the local bus for my last hop to Agios Nikolaos.