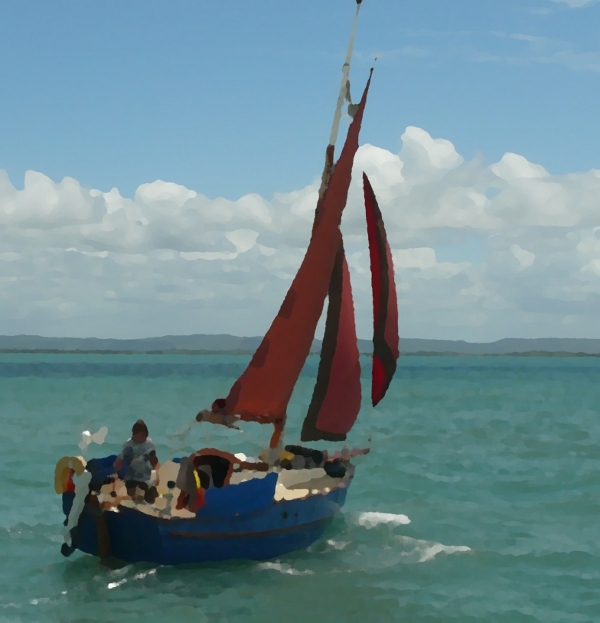 Oil Painting of Eileen of Avoca?

I first read of the Yarmouth23 in a yachting magazine in 1999. Two years later, while working in London (and inspired by a weekend at the London boat show), I paid a visit to the yard in Yarmouth on the Isle of Wight where the little gaffers were originally built. I felt it was time to get a closer look at this diminutive classic cruiser.

It was love at first sight… Trite way of putting it, but true nonetheless, for it was at this point that I resolved to buy one. But it was not until I came across Eileen of Avoca in late 2007 that I had the means to do so.

While there were two other Y23s for sale at the time, the rather neglected Eileen curiously drew my attention. Like a mysteriously abandoned ship, the cluttered disarray inside gave me the impression of  a hurried yet temporarily departure. At the risk of being overly anthropomorphic, Eileen of Avoca seemed to be patiently waiting for her crew to return.

I was told that the owner (Bill Boyall) had died and that while his boat looked rather run down, it was  more or less only a cosmetic issue.  With a new injection of funds to spruce her up, Eileen was soon looking as good as new.

I am thrilled with number 9 and I can’t imagine anyone else with one of these boats being any less enthusiastic. Much to my friends and families distress it’s been where I’ve spent all of my free time. Dolly Parton’s song Joleen (just substitute Eileen) sums up how the significant others in my life have felt about my boat. lol

From what Bill’s granddaughter tells me, he was similarly bewitched by Eileen’s charms… With her permission (and while the PDF can also be downloaded from the Yarmouth23 Owners Association site), I am re-posting Bill’s journal of his adventures with Eileen of Avoca to ensure it remains online.

And for those of you who have always wondered about the vessel’s name and history, I feel it is best conveyed through Ellana’s ( Bill’s granddaughter’s) own words…

“Eileen of Avoca is named after my nan and the part of Ireland that she came from, Grandad bought the Y23 in 2001 and she was launched in 2002, my nan had died in 2000, they had been happily married for 50 years and the new boat gave him something to focus on.  My grandad loved sailing for as long as I can remember and Eileen was his 3rd boat, he previously built Ellana and Ellana II, the latter is a Lysander which is now owned by my brothers. Alas neither of these boats were actually named after myself nor my nan (and the name that her father called her when she was a child). She would not allow grandad to call the boats Eileen when she was alive!”

“Grandad was very enthusiastic about the new boat and would often travel over to the Isle of Wight to see how production was going and once she was finished we had a little party onboard to celebrate on a cold Sunday in February. The rest of 2002 was spent with grandad taking many trips away getting to know Eileen, he was never at home!
He then planned his trip to Ireland, leaving from the old gaffers festival, the rest you know from his story. It was the December following his return from Ireland that we noticed that he wasn’t very well and was diagnosed in January 2004 with a brain tumour, he died in the June.”
***
When Eileen of Avoca returns from her odyssey (though this could be years from now), I believe that another trip to Ireland may be in order. I hope that Bill’s granddaughter Ellana will be able to accompany me for the return leg.

1 thought on “The history of Eileen of Avoca”