Crossing Biscay wasn’t something I was willing to take on without careful preparation. I spent hours sifting through my pilot books studying approaches to suitable bolt-holes and checking the tides for destinations as varied as Audierne to the north and La Rochelle to the northeast.

The prevailing weather conditions (winds with a northerly aspect and corresponding swell), would not make the passage trivial, and given the frequency of storms, it is not surprising that it took a week of sheltering in Gijon before a suitable three day weather window presented itself.

Gijon was my chosen jump-off point because it shortened my crossing by at least 24hrs (compared with La Coruna), and maximized options for changing my destination on route.

The idea was to head north as quickly as possible and try to stay ahead of the high pressure system’s center. I was only partly successful.

After a marvelous 24hr run in steady Force 4 winds, covering more than 100NM under sail alone, I stalled in light variable winds. Apparently it was not fast or far enough to outrun the high. The next two days were spent motor sailing, maintaining 4 to 4.5kts, a speed necessary to avoid being caught by the cold front strengthening in the Atlantic.

That’s the official line. I’d like to embellish it further and add volumes on the discomforts endured and how only fine seamanship and the luck of the Irish (I’m figuring that Eileen of Avoca qualifies for this), saved us from a certain doom as we fought a savage sea against a lee shore. But I’ll save that version for my retirement.

The unofficial version (for your eyes only) goes something like this:

I spent hours pouring over my pilot books because there is nothing else in the way of reading material on Eileen, and I stayed in Gijon a week because I didn’t want to be rained upon on route.

The approaching high pressure system equated to an inconsequential swell,which suits me fine because I can keep my food down better when I’m not being violently shaken about. 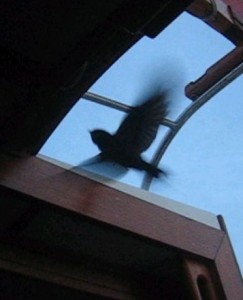 Swallow visiting Eileen for the night

My marvelous run was spent deciding what to eat next (at sardine sandwich o’clock or half past cold roast chicken), and dozing, because heading directly north from Gijon allows you to miss most of the shipping traffic (my radar detector bleeped only once).

All I had to do was stay on the boat and amuse myself while Eileen did the rest. Hardly an epic journey.

Apart from a surreal “Hitchcock birds” moment or two as increasing numbers of exhausted swallows noisily settled both on and in Eileen each night (in the most unlikely of places), it was delightfully uneventful. Dull is always good when sailing.

As soon as I see the first item in NAVTEXT transmissions taken on route stating “No Warning”, I know I can relax into my semi-catatonic solo passage making stupor. Here is one that almost threatens to be moderately interesting with its mention of fog and rain, but upon closer examination doesn’t quite manage it: