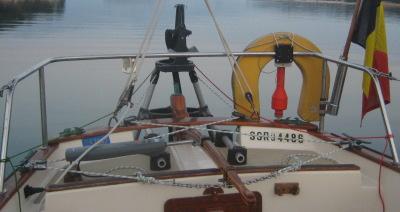 I asked the manager of the boat yard for some assistance in fitting the gear, but he made such a song and dance of how complicated it could be that I decided the path of least resistance was to DIY.
Perhaps the temperature had something to do with his reluctance. I never knew the human body could perspire with such exuberance!
Several blasphemous hours later the recalcitrant contraption was where it should be, but I still needed to modify the Autohelm bracket, fit some internal bracing to the through-bolts, and mount my flagstaff elsewhere.
The Autohelm bracket was essential because while the Aries is now bolted in place, it will not yet be operational until I get around to rigging blocks and running gear. A long sail to Gallipoli across the Gulf of Taranto without my trusty robotic assistant would be tiring to say the least. After negotiating access to the yard’s workshop I enthusiastically hammered the old bracket into a U-shape contrivance which mounts laterally on top of the tiller. Voila!
The other tasks would have to wait for another day.
A few celebratory drinks with the gregarious Neapolitan berthed nearby followed before I cast off from the pylons (a rather tricky maneuver), waved goodbye, and motored on through the much-improved (i.e. recently dredged) marina channel to the sea.
I set a heading of 70° and raised the mainsail as the sun set. Free at last. 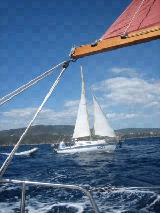 It all started out so nicely, the wind from the NW was slight and gradually increasing so that by 14:00 Eileen of Avoca was making way at between 3 to 5kt.

I took photos of our
traveling companions boat “Hepta” while they took photos of Eileen of Avoca. In the lighter winds I needed to use the engine to keep pace but as the wind picked up number 9 was in her element and took to the lead.

Rounding Cap Taillat, just two hours from our destination we were hit by near gale conditions. 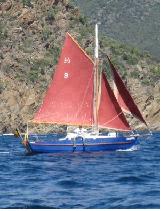 The wind was completely unexpected and I had to reduce sail fast as Eileen ran with the wind at 6.4kts. To make matters worse Hepta had moved to within a few meters of Eileen’s starboard bow and there was the very real risk of collision.

I called for Eva to start the engine while turning hard to port, (into the wind). This put an abrupt end to the lively acceleration, but it certainly wasn’t elegant, and with the bow now crashing into the oncoming swells, I was taking quite a shower. Within minutes everything was back under control and I set the jib to steady the boat as we motored with the wind in an attempt to catch Hepta.

Our friends had not faired too badly given that they’d been swamped by waves as their boat made valiant attempts to pitch-pole in the sudden gusts. When I caught up with them their mainsail was lowered and manually held out over the companionway in an attempt to keep out the water but Hepta was making good progress nonetheless with her small outboard at full revs. The only worry was whether they had enough fuel to reach port.

All the other pleasure yachts in the area were also heading for the nearest port, with the exception of one crew whose yacht seemed completely out of control as it took a course in the opposite direction closely followed by a concerned coastal patrol vessel. 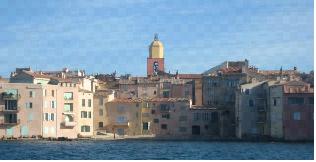 Before long we were entering the port of St. Tropez, site of one of the largest collections of floating “Gin Palaces” I have ever seen. At 20 Euro a night this was the most expensive marina fee paid so far but I would have been willing to dispense considerably more just to witness the extravagance on display. 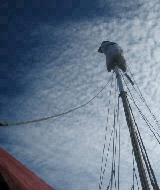 The Mistral winds howled through the rigging all night but by morning the tempest had subsided. Despite the improved conditions Eva and I decided stay at port and play tourist for a day and Port du Lavandou did not disappoint (see http://www.lelavandou.eu/port2001/index.htm).
There’s good access to chandlers and sail makers in the port so I took the opportunity to do some basic maintenance, i.e. replace my jack stays, and fix a bad connection on the tri-light which involved climbing the mast, (as I don’t have a bosun’s chair I use my life jacket’s harness to attach a safety line). I felt that taking the mast down in this case was over-kill. Eva found the whole exercise very amusing and instead of keeping the line taught was busying herself taking unflattering photos of me.
Believe it or not, we met another couple in the marina whose sailboat was smaller than Eileen! No small feat in the Cote d’Azur, and before long we had made some new friends, dental students of German heritage but living and studying in France. Over a few drinks that evening it was decided to leave on Wednesday and sail together for a few hours before heading our separate ways. The weather forecast promised nothing more violent than occasional gusts of Force 5 so we expected a leisurely sail. 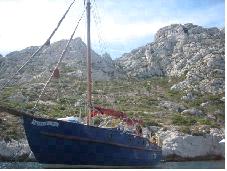 (10:45) The beautiful weather and lack of wind saw the sea fill with a plethora of pleasure boats exploring the calanques (Mediterranean fjords) and islands to the south of Marseille, each vying for the best swimming spot. The calm weather allowed me to take the pass between the mainland and Ile Maire, and not to be outdone by the locals, I headed for Sormiou to claim my spot in the shallow protected waters of the calanque. A lazy day enjoying the good company, warm sun and crystal clear sea, perfect! 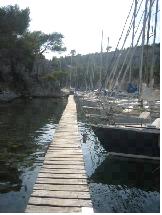 Well almost perfect, I did have a few embarrassing minutes of excitement as I climbed aboard rather promptly to reset the plow anchor before drifting against our neighbours yacht. I guess I should have used the Danforth!
By 15:00 it was time to weigh anchor and find a spot for the night. About 4 miles away was Port Miou. I was met by the friendly marina staff zipping about on their tender and quickly found a spot on the east side of the calanque. After paying for the night (12 Euros, water but no electricity) they provided me with the latest weather fax from Meteo France, a couple of waterproof pouches as souvenirs and directions to the nearby tennis club and restaurants. I’m glad I arrived fairly early as this is a popular spot during the day, but completely deserted at night (see http://en.wikipedia.org/wiki/Calanque_de_Port-Miou).