The 22hr down-wind sail (averaging around 4 to 5 kts) from Porto de Palmeira to Tarrafal was exhilarating. Unfortunately, I was not able to get much sleep (for fear of running into the island), so I was mentally if not physically exhausted on final approach to Tarrafal, No matter, plenty of time to rest once at anchor. 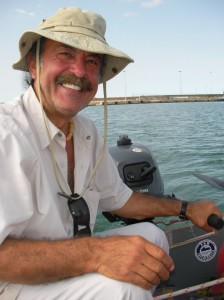 I was on a natural high, and having caught a large tuna on route I felt sure to win the fishing competition spontaneously organized with my Turkish sailing buddies in Sal. “Ah, what a fine meal it will make!”, or so I thought…

Of course, nothing ever goes precisely according to plan.

Upon arrival I found the small anchorage filled to capacity, and all shelter behind the breakwater taken by local boats. I spent almost two hours trying to set my anchor but it stubbornly refused to hold.

No problem, I can do stubborn…. besides I need the exercise. Hauling aboard my 25 meters of chain, I moved Eileen for the umpteenth time to seek better holing in shallower water by the beach.

I flagged down a Frenchman as he sped by in his dingy and asked if he could kindly deliver my prize catch to my Turkish friends so it wouldn’t spoil in the increasing heat (they have a refrigerator), and continued my game of drag the anchor.

Having unsuccessfully tried both my Danforth and CQR, (and motored backwards past everyone else’s boat at least a half-dozen times), a Spanish registered vessel took pity on my valiant attempts to plow the seabed, and surrendered their mooring to me.

I thought it was out of pity, but apparently it was out of extreme gratitude. Gratitude for mistakenly being the recipients of my tuna dinner. Curse that Frenchman, he took my catch to the wrong boat! Well, at least I will be able to sleep now that I am secured to their buoy…

What followed was a string of interruptions as several enterprising young men swam out to my boat, climbed aboard (despite my protestations), and began insisting they be paid a fee for using “their” mooring.

That triggered the proverbial “straw that broke the camels back” response in me, and I’m ashamed to admit that at this point I completely lost my temper…

Throwing the mooring buoy back in the water, I started Eileen’s engine, told my uninvited guests where they could put their fee, and sent them scrambling back into the water as I motored away.

So much for Tarrafal, I’ll sleep on route to Mindelo.