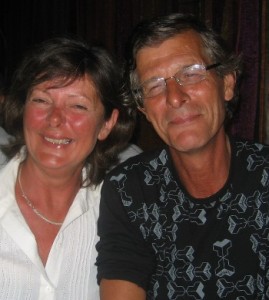 Matt and I left Roccella Ionica in high spirits, it was great to be moving again and while the sea was still boisterous, the winds were favourable.

Our destination? Siracusa Sicily, just under 110 NM away on a heading of approximately 212°.

Upon departure we said our goodbyes (en passant) to our new French friends on their yacht“Oceane” and braved the remaining swell at the ports entrance. Matt found the surf highly amusing but I must say that running Eileen at full speed against a potentially breaking swell is not my idea of a good time.

After the torrential rains of the last week, the sea was littered with floating debris, including whole trees! However, we were more concerned that this made fishing with our newly acquired (blue) lure, (purchased on the advice of our infinitely more successful {surely only in terms of fishing…} acquaintances), almost impossible. We’d only get the line tangled in bunches of bamboo or other flotsam, never mind that some obstacles were so large they presented a shipping hazard. 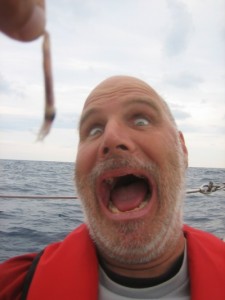 All we managed to catch the entire trip was what happened to fly on deck. In this case tiny squid which Matt was more than eager to try.

While storm clouds constantly threatened we made the night passage without incident and by morning entered the secure port of Siracuse.

I opted to spend a night at the marina but upon reflection it would have been better to remain at anchor in the bay as many other yachtsmen had chosen to do.

In the light of the following day, it was apparent that we had seen this yacht before (anchored out in the bay at Argostoli, Chephalonia). Curious I went to chat with the owners, a gregarious French couple who were more than happy to recount their ordeal at sea. When I asked how they had managed to navigate the breakers, they answered that it was simply fear and good luck that saw them through.

Over a glass of Ouzo with ice (such luxury), we swapped details of our traveling exploits, and it was only several (well lubricated) hours later that I returning to Eileen of Avoca, laden with fillets of swordfish generously supplied by my new French drinking buddies (they obviously had considerably more success in the fishing department that I did). The fish was delicious!

The weather has been atrocious and we have been stuck in port for four days. If it wasn’t for the excellent pizza restaurant at the marina and the sociable company of the other stranded yachtsmen we would be going stir-crazy. The local dogs have certainly gone mad. One attacked Matt yesterday and ran off with half his thong (the flip-flop variety). 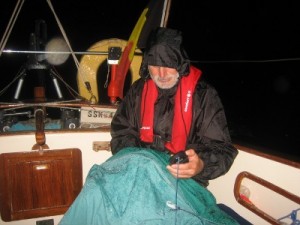 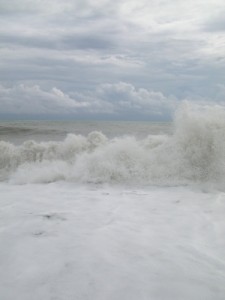 Thursday the 1st of May

A 7:30 start. No wind, no waves, just a beautiful sunny day. More kite flying, unsuccessful fishing, and dolphin watching. By 17:00 I was entering the small port of Le Castella. Not a worry for a shoal draft vessel like Eileen, but the bedrock is of serious concern for sailing vessels drawing more than 1.5m. I had a couple of hours to visit the town and do some housekeeping before the final leg to Sibari.

Velenosa completed her journey here and Marina I, stayed the night as they were bound for Gallipoli (the Italian Gallipoli) in the morning and the crew insisted on a good rest.

With no mutinous crew to contend with I voted, seconded and carried the motion to make good use of the prevailing calm and left at sunset foregoing sleep in order to arrive at Sibari by 9am. 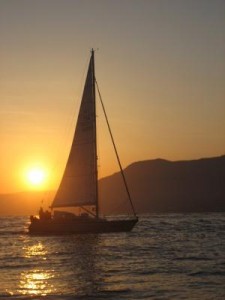 Wednesday the 30th of April

Just before sunrise I was able to contact the Italian boat (Velenosa) and rendezvous to pass the Messina strait in company. It was an easy passage through the notorious waters, but the turbulent current was still evident and I was glad I did not have to traverse this stretch in poor conditions. The Homeric tales of whirlpools off Scilla were never far from my mind.
Three hours later the wind backed and I was faced with making way against the prevailing conditions. The sloop rigged Velenosa was happily tacking in the Force 5/6 conditions but if I was to reach Roccella Ionica before nightfall I would have to take a more direct course and motor. After a wet and bumpy 4 hours at no more than 3kts the wind dropped and shortly afterward the sea calmed. I am always surprised by how rapidly the sea can change. 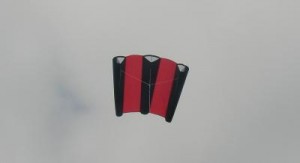 Before long the water took on a silky smoothness interrupted only by a long and gentle swell. It was time to make use of my new toy. A kite to which I had fashioned a camera mount. Following me by no more than a mile was what I supposed to be Velenosa, (it turned out to be another yacht altogether called Marina I) and as I flew my black and red kite the vessel approached.

In port I was to learn that they believed I was signaling them, one of the crew even confessed to have taken out a guidebook to decode my curious message. They were delighted to learn that it was just my attempt to take some novel snapshots and video footage of Eileen of Avoca underway (a birds eye view).
In port (No charge for visiting vessels for up to 5 days) we met to exchange accounts and together with the crew from Velenosa we sat at the restaurant terrace to a meal of pizza, pasta and beer.