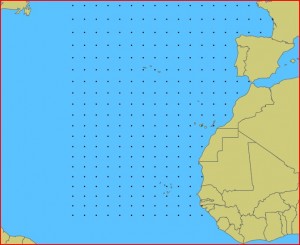 I’ve spent the last couple of weeks improving my weather by sms service for the Mediterranean and East Atlantic (Including E Atlantic islands and the mainland from the bay of Biscay to Cape Verde).

Here is the latest on how to use it.

Send a text message from your mobile phone like so:

to the following Belgian phone number:

You will receive the wind forecast for Latitude 38 degrees, Longitude 8 degrees. Note the leading 0 before the 8. This is required for longitude entries of less than 2 digits.

For positions west of the Prime Meridian prepend a – symbol as follows:

The sms you receive will look something like this:

The first line shows the date and time of the GRIB forecast. In this case 06:00 UTC on the 23rd of October.

The second line gives the position in degrees latitude and longitude. Note that longitude also shows minutes. The reason for this is that the East Atlantic weather information (just to make things difficult) is provided in 1.25 degrees of longitude increments.

Hence if you request:

So the idea of the second line is to inform you of the actual position of the GRIB data (which may not be the position you explicitly requested).

Awkward at first, especially as requesting -09 degrees longitude will result in the system NOT finding any data (surely 8.45 was near enough!), but you will get the hang of it.

Having trialled the system this summer in the Mediterranean, I was occasionally caught out, even when the reported wind speed and direction was fine. The trouble was that the sms system neglected to inform me of pending thunderstorms or large seas.

In this enhanced version you now receive a second sms (after about a minute) with the marine forecast for the specified area. Since sms messages are by definition small, I’ve had to create a pseudo shorthand for the forecasts.

All occurrences of North, South, East and West have been substituted with N,S,E,W.

Increasing is shown as < and decreasing as >

occasional as occ. , variable as var. and moderate as mod.

It shouldn’t be too difficult to decipher. 😉

While I am testing the system it is available free of charge, but if you find this weather service useful, a small donation at www.ifno.info will help pay the sms bill and ensure further development.

GRIB data points for the Mediterranean

I have been keeping myself busy while Eileen of Avoca has been out of the water by setting up my own weather by mobile phone service for the Mediterranean.

Because when the weather turns, setting the computer up for a quick weather check can be somewhat of a challenge. I wanted something much simpler, and weather forecast  (text messages) by mobile phone fit the bill.

The system uploads Mediterranean GRIB data (at 1 degree resolution) 4 times a day. You access it by sending a text message giving your latitude and longitude to the nearest degree.

Example 36N 25E for the sea between Crete and Kos

36N 05W for the straights of Gibraltar

You compose an SMS message with the following content (make sure it is all lower case):

and a few seconds later you have the 24hr forecast for those coordinates.

Note that west of the meridian you use a negative number, so for the straights of Gibraltar you need to send:

Best of all I offer it to my loyal blog followers for free (all 3 of you). At least while the pre-paid credit lasts.