Saturday the 7th of April 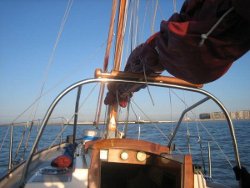 I had arranged for a friend to join me for the last leg to Belgium and he arrived by train just in time to leave by the first opening of the lock at 13:28. As there was still little in the way of wind, I motored to Nieuwpoort. The complimentary tidal stream coupled with occasional use of the foresails provided a brisk 8 knots SOG giving us an approximate ETA of 19:30. Navigation was a cinch and involved little more than following the shipping channel buoys (keeping the line of red buoys to starboard). With innumerable sandbanks and accompanying shallow water, I imagine this must be a tough trip in unsettled conditions. The scenery is nothing to write home about and the only event of note other than the occasional passing freighter was a visit by the French coastguard, who seemed content to look me over before speeding off to do more important things. They probably left me alone because I wasn’t flying a British ensign.

There are no formalities when entering Nieuwpoort, just motor in and follow one of the visitor signs. While KYCN are still furiously renovating for the coming season, I chose their offering in the old harbour (keep right) and had no regrets with the decision (see http://www.kycn.be/en/home.html).