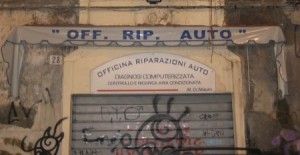 After checking the weather at a local Internet cafe (the marina told us that their WiFi didn’t work) it became apparent that we would have to change plans as any attempt to reach Malta (Matts’ departure point) in the following week would be bordering suicidal in a small boat.

While the conditions remained stable we chose to move Eileen to Catania, 35NM further north, where Matt could catch the weekly ferry service to Malta.

We arrived just as the weather closed in and moored at the yacht club in Porto Nuovo. A good choice as we were enthusiastically welcomed by the staff and made to feel at home (thanks Massimo).

For anyone visiting Catania, be sure to ask Massimo where to get the best “brontosaurus size” steak in Sicily.

Between frequent downpours (always forecast at least 2 minutes in advance by plagues of umbrella vendors spontaneously emerging from the woodwork), we managed to do some sightseeing and get a taste of Catania nightlife. Fascinating, but I’d think twice about having my car serviced here after coming across this premises (see photo). 😉