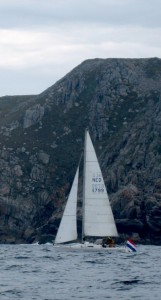 Overtaken by the Dutch

The forecast swell was under 1.5m for the next three days so I made good progress under power despite frequent showers and little wind. At least the fishing was good, withing 30 minutes of leaving the marina I had already hooked another Bonito!

This very patriotic racer (judging from the size of his ensign), overtook me just 15 miles out from La Coruna despite my liberal use of the iron topsail.

At just under 45 nautical miles, and traveling at 4.5kts, I reached my first stop at the anchorage in Carino well before dark and spent the night rolling about despite the relatively benign conditions.

The rolling itself doesn’t really bother me, but the washboards and the companionway steps tend to creak when Eileen sways from side to side, and this together with the thumping of the rudder as it shifts in its fastenings tends to irritate me after the first few hours of sleep deprivation. 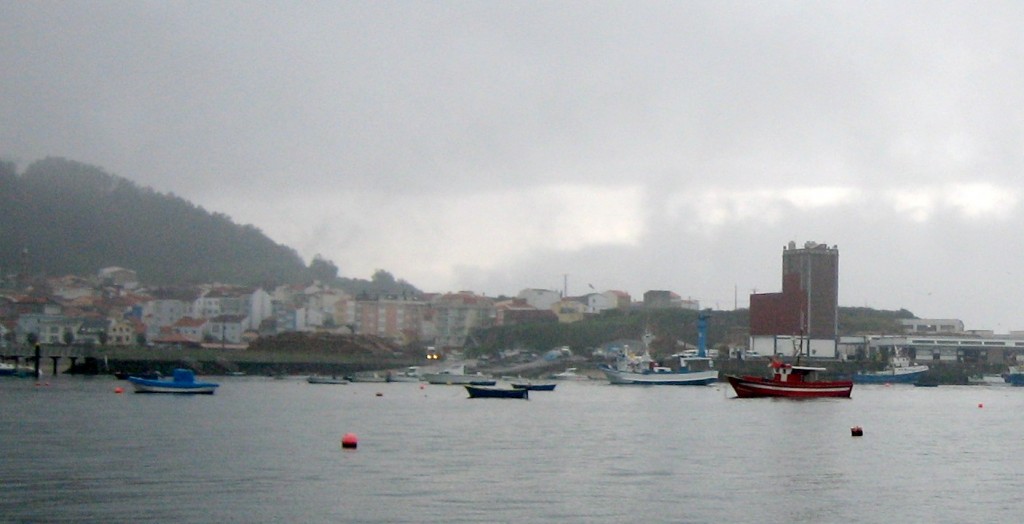 Carino has a pontoon with small fingers, but I couldn’t be bothered to make my way through all the moorings to get there, or dig out my fenders for that matter. A larger boat should not even consider berthing there.

In the morning mist and drizzle I made my way to what must be the northern most headland of Spain, Punta Estaca de Bares, and set my course for Ribadeo, covering approximately 45NM (motor sailing) by late afternoon. 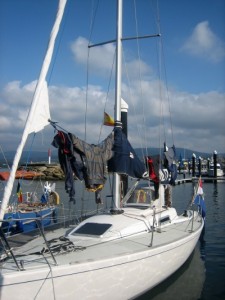 Wet ride in a J-boat

I found myself moored next to the same Dutch racer (a J-boat) that had overtaken me leaving La Coruna, and judging from the foul weather gear hanging out to dry, they had had a very wet ride. Smugly dry, I made my traditional offering of fish pate (this time mixed with avocado), and we sat down to exchange travel adventures over drinks.

I didn’t really get to see much of Ribadeo, which is a shame because from what I’ve read it’s a picturesque town. But at the time I had more pressing concerns. I’d forgotten to return my gate/shower key before the office closed and that meant I’d have a late start (if I wanted my deposit back) for my next and longest leg to Gijon (almost 70NM away).

If you believe that last remark, I have some fine real estate for sale in Nigeria… 🙂 The only algebra I do while cruising is something along the lines of: If x=relaxing, and z=sleep find y… hmmm y bother about it…

I spend most of my time just watching the world go by and daydreaming. 🙂 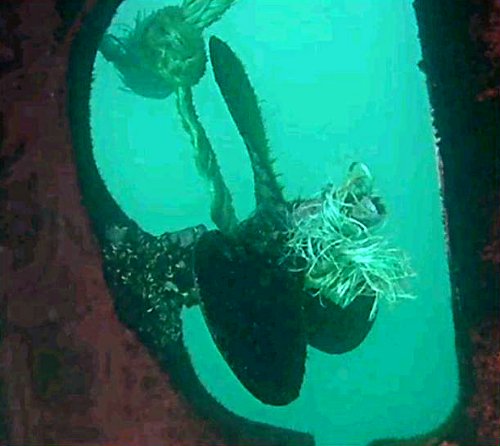 Rope caught on the propeller

Obviously not much happened on this leg. Apart from a 30 second skinny dip to remove another propeller entanglement, which I don’t really mind doing provided the sea is relatively tranquil. Mind you, I do dread the day it happens at night and in boisterous seas.

The toughest part of this passage was rounding Cabo Penas at sunset. I had to battle a west flowing current in freshening Force 5 north easterlies. At just 1.5kts SOG, it took quite a while. It even prompted a looking over by the Aduanas (customs) boat. I gave them a wave and they left me to continue my game of hobby horse around the cape.

My approach to Gijon was also somewhat noteworthy. My hand-held GPS plotter didn’t show a newly built breakwater which obscured half the lights off Banco las Amosucas and the inner breakwater. Adding to the confusion were a series of green lights that would flash and then turn red. What kind of sectored lights do that when I’m simply maintaining my course? The answer? Pedestrian traffic lights that just happen to be on the recommended track to the marina.

Never mind… I still made it to the visitors pontoon (by 1:30am), which was just in time to have a celebratory drink at one of the numerous waterfront nightclubs. My 30 minutes of nightlife at the Habana club left my ears ringing and did much to renew my latent agoraphobic tendencies.