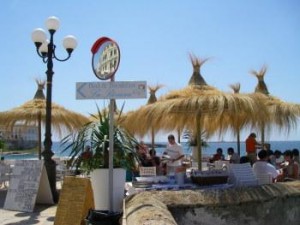 75 uneventful and fishless (yes I’m now trying for catch number two) miles later I entered the mercantile port of Gallipoli and was directed to a berth against the inner breakwater. Time to play tourist in Gallipoli (which incidentally derives from the Greek or Latin word for beautiful city). This is a favorite and inexpensive destination for Italians on summer vacation and boasts beautiful beaches, crystal clear waters and fabulous food.

Apart from the local fishing boats there were not too many sailors about, it would appear that the tourists and locals alike are more interested in doing seal impersonations and sunning themselves golden brown on the rocks all day. Pay no heed to that last covetous remark while I dab yet more sunscreen on my pasty white office complexion.
My mum was in gastronomic heaven and had a ball. I just wanted to go sailing, so without further ado I shanghaied her for the next leg to Corfu.