I’ve stocked up on fuel and am now as heavily loaded (200L of Diesel, 100L of water) as I have ever been with Eileen. Surprisingly, she doesn’t seem to find the extra weight a bother. Now if only we all could put on so much weight and still look so handsome! One more item to add to my newly compiled list of why Eileen of Avoca is better than a real girlfriend… 😉

I’ve met a very diverse group of sailors while in Las Palmas and admittedly it is not easy leaving the last bastion of Europe behind, (Eileen has stayed 20 days, 7 of which I used to take a cheap flight back to Belgium). With everything so handy, it’s no wonder many sailors spend inordinate amounts of time dithering here before making that last step to head south or west. Not that Las Palmas Gran Canaria has much to offer and it certainly gets no special recommendation from me. Quite the contrary., and here’s why: 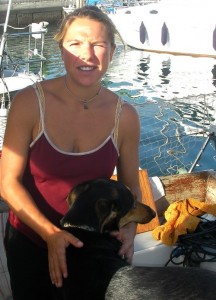 The crew of Corner Muse

On the positive side, a little extra effort (climbing around the locked gates) and you are suddenly free to play social butterfly with a vast variety of boats and crews of all nationalities and walks of life.

I had the crew of the Swedish boat, Fot28 over last night for drinks and a bite to eat. I thought Eileen might have difficulty with storing provisions for a month but if the requirements for a crew of four (one extra ring-in for the Atlantic crossing) can be crammed into a 28ft boat then I have room for at least anther two crew. You can follow their adventures here.

While on the subject of sailing Swedes, the young but experienced crew of Mazarin (briefly mentioned as my neighbors in posts from Lanzarote, and my frequent companions over coffee at the Sailors Bar), were also busy making final passage preparations here in Las Palmas.

If you think crossing the Atlantic isn’t enough of a challenge, why not try it with your one year old child in tow? Click here

See, it can be done! An inspiration for all those would be sailors making all manner of excuses for not leaving home.

Keeping the “baby and no excuse not to be out there sailing” theme running, pictured above is the intrepid Belgian (the girl) / Portuguese (the dog) crew of Corner Muse, making an unscheduled stopover in Gran Canaria as her baby is due in just 5 days.

And just one more link to my neighbor while in Las Palmas (for my extensive German readership… lol).