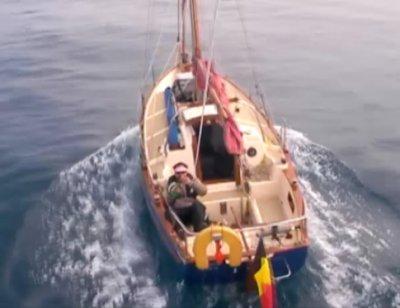 Wednesday the 2nd of May

I listened carefully to VHF channel 68 on route (an automated system continually broadcasts the marine weather forecast for Italy in an almost unintelligible manner) to determine if the calm conditions would last the night. As there was no mention of gale warnings I was confident of an easy run, and so it was until reaching Crotone at approximately 1am. No moon, my small world faintly illuminated by the tri-light and the red glow of the instruments.

The sea was almost pitch-black though my wake glowed intermittently, lit by mini vortexes of phosphorescent plankton. A spotlight pierced the dark and came to rest upon Eileen of Avoca. “What on earth…?”

The spotlight moved on and I made out the navigation lights of an approaching vessel. The glaring light returned. Should I continue? Should I stop? I took the latter option and waited to see what would transpire. All was still. A nearby dolphin leapt from the water adding to the surreal moment.

The blinding spotlight returned as a large gray motor vessel came alongside. I could just make out the silhouette of her crew as they came to within a few meters of Eileen. It was the Guardia di Finanza. They questioned me for nearly 20 minutes and then as unexpectedly as they had arrived they said their polite good-byes and disappeared into the night. How bizarre!

Little did I know at the time that the Calabrian Mafia families were feuding in Crotone and all unusual traffic was subject to careful scrutiny by the police.

Shortly afterward I had a most dazzling display by a group of dolphins. Dazzling because they were bathed in the neon glow of phosphorescent plankton. The spectral display as they performed their intricate dance under the bowsprit was breathtaking. If only I could have filmed this!
30 minutes later the wind returned from the N NE with a vengeance. It was 2am and I certainly was not in the mood to fight a headwind. I put in two reefs and set a course westward. A small marina just south of Punto Alice (Ciro Marina) and 10 NM distant offered me a convenient bolt-hole. One I was eager to use. By 4am I’d made fast to the quay and promptly went below to sleep.

By sunrise the fierce winds had died and the sea was tranquil once more. I rounded cape Alice, set my fishing line and sat back to enjoy the sunshine. Before long, and to my great astonishment, I finally caught my first fish. I confess that at the time I had no idea what sort of fish it was (apparently a small Tuna) but it looked edible.

Having finished my cooking fuel and being but a few hours from my final destination, I reluctantly threw my prize back. Eating my catch will have to wait for another adventure.
By 18:00 I’d navigated the incredibly narrow and ridiculously shallow passage into Sibari and made Eileen secure.

Thursday the 3rd and Friday the 4th of May were spent travelling by foot (6km), train (600km), metro (25km), foot (2km), and finally car (1500km), back to Belgium.
Eileen of Avoca will sit at Sibari for the next two months waiting for her next trip to Greece.