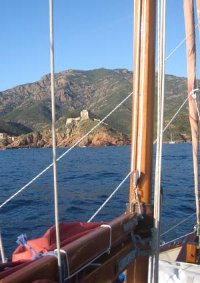 Of the many yachts poised to leave Calvi’s picturesque fisherman’s harbour I was the last to leave. After two days of sitting out the bad weather I was determined to make up for lost time and resolved to make Bonifacio my next port of call.

The SW wind was not favourable but with a little help from the engine (i.e. standard Mediterranean sailing), I set a course close to the coast, making considerably better time than the yachts that had left an hour or two earlier (they had headed due West under sail alone). With just enough wind to warrant putting in a reef, I set the Autohelm and settled in to relax and watch the scenery (and oddly enough, my bow fender), go by. I’d obviously forgotten to stow all my fenders.

Rather than continue lamenting the loss I decided to attempt its retrieval in a man overboard drill. I wonder what the other yachts made of my subsequent erratic maneuvers but before long I had my prize and put it to immediate good use as a backrest.

Perfect!
Except that the log mysteriously indicated that I was powering along at a consistent 0.0 kts. Before long this small annoyance had grown to exasperating proportions necessitating a quick stop at Girolata to investigate (see photo for the approach).

After my swim to clean the log impeller of its calcareous sea life, I had just enough time to admire the fine bay with its ancient Genovese fort overlooking a pristine beach where locals gathered to play petanque by the waterfront restaurant. In peak season the bay hosts numerous yachts but as I motored out at sunset only a handful had settled in for the night (see: http://www.go-to-corsica.com/girolata.html).