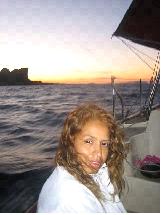 (06:00) An early start as the weather was set to turn this evening and I wanted to be as far as possible to the east so that the force of the Mistral would be somewhat moderated. My girlfriend Eva was not too pleased about leaving while it was still cold and dark. Mind you even water temperatures of 24 degrees seem frigid to her. She lasted approximately 15 seconds in the water yesterday; I put it down to her Mexican heritage. With Cap de L’Aigle silhouetted by the rising sun and a brisk wind in just the right direction, I couldn’t be happier.
All was going according to plan but it was obvious by 14:30 that the Mistral had arrived ahead of schedule. I’d set too much sail including a whisker pole out on the staysail. Oops! When the wind gusts arrived they were a good force 7 and while I was quick to furl the jib, the staysail was a tangle. After battling with the mainsail I worked my way to the pulpit to sort out the mess. Eva is a lithe 45kg but was having considerable trouble keeping the bow to windward while I battled the recalcitrant sail. In the end I had to remove the pole end fittings before I could beat the staysail into submission. The following hour was spent motoring under bare poles to Port du Lavavdou (which was given a good review by the pilot book) and on route it was decided to stay put while the Mistral blew.