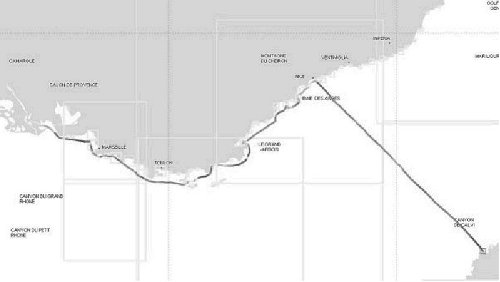 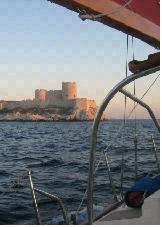 (15:00) It was a late start to my sailing week, as I had to wait for the Capitanerie to reopen following the usual extended French lunch break. With a planned 25 NM trip to Port du Frioul just off the coast from Marseille my girlfriend and I were eager to get started even after driving more than 1200km on Friday night from Amsterdam and having had less than 4 hours sleep. We considered ourselves lucky as the weather forecast for the next few days was fine with the Mistral (which really howls through Port St. Louis and the rest of the Camargue for that matter); set to return no earlier than Tuesday.

There really isn’t much to Port St. Louis and it’s a bit isolated (If you don’t take your own car you’ll need to catch a train to Arles; worth the visit; and then take the infrequently run bus from there). Taxi fares from Marseille airport will set you back as much as the airfare. The port lacks character but is reasonably priced (at 72 Euro a week) and the facilities are good. It’s no surprise that the nearby Port Napoleon is so popular for wintering (see http://www.port-napoleon.com/) but you need to get quite a way out of the commercial port before the scenery improves.

It was just on sunset when we rounded Cape de Croix and saw the chateau fort of Ile d’lf (made famous by the Alexandre Dumas novel The Count of Monte Cristo) and before long I had settled in by the visitors quay against the sea wall joining the islands of Ratonneau and Pomegues (at the far side of the marina and contrary to directions given by the pilot book). The buzz of quayside restaurants in the balmy evening set the holiday atmosphere and we toasted our successful first leg over a glass of port.