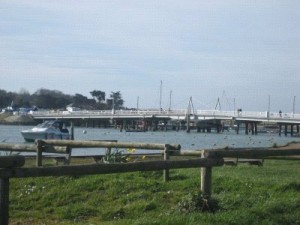 We arrived at the Yarmouth Marine Services boat yard at approximately 2am local time. It was a clear night without a breath of wind. The moon provided ample light as we made our way across the jetty to “Eileen of Avoca” sitting quietly at the seaward end. She was such a pretty sight and I regret not having taken a photo. Not that I could have done the scene justice with a picture.

As it was rather cold Arijen and I hurried to transfer the boat cushions from the car to the berths below deck to make our bed. After 12 hours of travel from Amsterdam we were both eager to get some sleep so loading bags of supplies and equipment for the shakedown cruise was relegated to our morning task list. 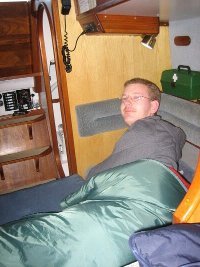 Fully clothed we crawled into our sleeping bags and spent the rest of the evening in a fitful shivering slumber. Too lazy or too tired to get up and put on warmer clothes, it was a difficult sleep.

At 8:30 we awoke to a fine day, though the magic ambiance of the night before had vanished with the tide. We made short work of preparing the boat and by 10:30 I called the Harbour Master on my mobile phone to book a bridge opening at 11:30. While waiting I busied myself making breakfast (sausage and eggs on fresh bread) in the small unfamiliar galley. Not that this presented any difficulty because before long both skipper and crew had sat down to a morning feast.

Stomachs sated, we started the engine and cast off to start our little adventure. A motor cruiser joined us to queue for the bridge opening but the wait was not long. Within minutes Eileen led the way past the bridge and its operator, through the outer harbour and on into the Solent. 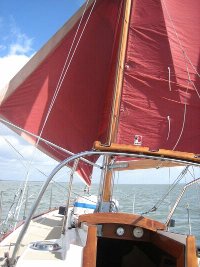 Clear of the pier we set about hoisting the mainsail and unfurling the foresails. Eileen’s sails, a brilliant contrast with the clear blue sky, were quickly filled, and with the engine silenced she set a brisk pace to the northeast running with the wind and tide.

By 14:15 we were passing Cowes close to the buoyed channel and well away from the restricted shipping area. Apart from the scheduled ferry services and occasional large container vessel there was little in the way of traffic. It would appear that the private pleasure boat owners did not expect the fine weather and had made other plans for the day. A sea of masts in the marinas showed little in the way of activity, but as the day progressed an occasional yacht made a brief appearance on the water. 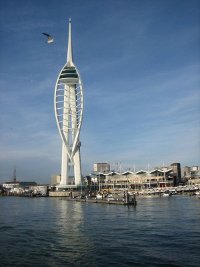 By 15:30 we had set a course to cross the Solent from the north of Ryde Pier to Portsmouth. In the clear weather the Spinnaker Tower appeared deceptively close but it still took a half hour to reach our transit point. A hovercraft plowed its noisy way past on more than one occasion as did the car ferry from Fishbourne to Portsmouth but by 16:00 we were making good time in gusty conditions on an increasingly agitated sea. From the planned transit we turned to port making our way past the number 4 buoy, bringing the engine to life while simultaneously reducing sail. A quick call to Haslar Marina on VHF 80 gave us concise berthing instructions and before long we were bumping against the pontoon opposite the green lightship. I say bumping because in all the excitement and I am loath to admit also because of my lack of clear instructions, we overlooked lowering the fenders, oops! Well at least I know the rubbing strake has been well positioned.

After some fussing over warps and fender heights I made my way to the marina office to pay our dues which amounted to less than 10 pounds as it was still the off-season. Back at the boat over an Amaretto and Port, we celebrated our successful sea trial. A hastily prepared meal followed by more drinks quickly evaporated all intentions of sightseeing and we prepared for an early night. Having learnt my lesson on how cold it can get in March from the night before I put one sleeping bag inside another just to be sure. Being a few centimeters shorter than my Dutch crewmember I was relegated to the V-berth while Arjen made use of the modified sleeping arrangement in the saloon. While the regular coming and going of rather large ferries set the boat rocking and creaking on several occasions we still slept like hibernating bears.