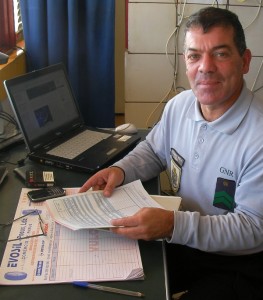 I am traveling through a part of Portugal I now know relatively well. Most of the ports I’ve visited once before so I’m very relaxed while passage making. It’s always easier when you know what to expect. Especially when dealing with your paperwork in port.

I’m still sailing without company, but a yacht called ‘Summer Song’ with a young British crew heading for the ARC rally are not far behind. They tailed me from Leixoes and we shared the anchorage by the military base in Aveiro last night.

Nice to see some younger sailors for a change. They apparently quit their jobs to make an Atlantic circuit and are sailing a boat that cost no more than the average new car (they didn’t tell me how much exactly). Perhaps I will see them again tonight in Figueira da Foz and we can share a glass of Port together. For the curious, I’ll try and slip in the how much did it all cost question at some point. 🙂

Summer Song at anchor in Aveiro

The weather is fine but not hot. Sunny days with slight winds for the most part. We do seem to get quite an easterly breeze in the mornings (Force 4), but it dies down after a few hours and I’m left motoring for much of the day. By late afternoon it returns with a vengeance as a northerly Force 4 or greater, but this too is short lived. All local phenomenon and is the Portuguese equivalent of the land-sea breeze I’m used to elsewhere. 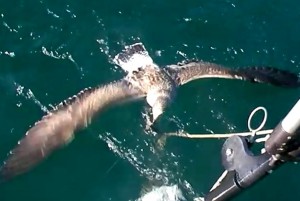 Catching birds instead of fish

Well, I’d better get back to my puttering along the coast at 4.5kts just a mile offshore, admiring the beaches and trolling for my next meal. I do wish those seagulls would leave my fishing lure alone…

So, what are you all up to?

PS I did have that glass of port in port, and the answer to my question was about 40,000 pounds! OK so it’s the cost of a more than average car. 😉