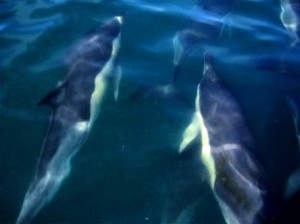 Over the next leg I had a dolphin escort for much of the journey. Rather large dolphins I might add, perhaps it’s all that fertilizer floating in the Rias that’s bred a race of super large and extra cheeky cetaceans. I say extra cheeky because individuals in this pod had developed a new way to amuse themselves by splashing me (without resorting to the blow-hole technique describe in an earlier post).

The trick involves leaping from the water and giving an extra slap of the tail at just the right moment upon reentry to effect an extraordinary large splash . Very sopping amusing…

The ‘Big Brother’ helicopter was at it again today, but it was more interested in a trio of south bound yachts, and only bothered to give me a single flyby.

Approaching the anchorages off Muros, Spain

Approaching Muros, the wind picked up considerably (to its usual two to three times that indicated in the windguru.com forecast). Double reefed, I made excellent time traveling at a brisk 6 knots so I arrived in Muros by mid-afternoon giving me plenty of time to examine its two anchorages.

The one closest the marina (and town) was over (reportedly) foul ground, and at 10 meters, I opted for the shallower eastern side over sand and weed. Here I would have ample scope for my meager 25 meters of anchor chain.

It was a tranquil night and my sleep was only interrupted once when at 5am a crescendo of engine noise, followed by subdued Spanish conversation and culminating in much rattling of my anchor chain, had me frantically reaching for my clothes.

Once suitably attired (yes, I know I have questionable priorities), I ventured on deck to discover a couple of fishermen passing their tiny boat under my anchor chain. Upon seeing me, they explained that they were just getting themselves unstuck from my chain and that there was no need to worry, which I figured was the polite Galician way of saying “you anchored on our fishing net, dimwit”.