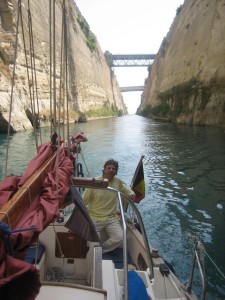 Departing Aigina at sunrise, Matt and I motored westward toward the Corinthian canal entrance. By 1:30pm we lay moored by the canal authorities control tower where I paid the 95 Euro transit fee. Several boats were on route from the western end, and as they approached I moved off the quay to avoid their wash. Easy.

Just after 2pm we were literally waved through (so much for standing by on channel 11 VHF) and Eileen of Avoca majestically (if you ignore Matt’s laundry hanging everywhere) motored into the Gulf of Corinth.

Spectacular! Especially when the sky darkened, storm clouds moved in and lightning forked menacingly over the mountains to the south. That sort of spectacular I can do without, especially when it is accompanied by rain. Thoroughly drenched, we motored on into the night arriving in Navpaktos by daybreak.