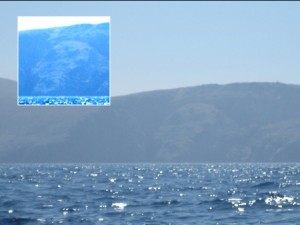 6th September. 4am in the morning, it’s warm, the moon is up, the winds are gentle, and the sea is calm. Perfect conditions for motor sailing SW to Astipalaia (also called Stampalia). By daybreak Eileen approached the NE end of the island (Ak Floudha) with the secure anchorage of Vathi as our destination. I’d read in the Greek Waters Pilot that the island had been used by pirates so it seemed very appropriate that the headland boasted a rock formation resembling a human skull (see photo and use plenty of imagination).

The inlet of Vathi which in light of certain aforesaid geological formations must now be dubbed “Skeleton Island” was a pleasant surprise. While there isn’t much there aside from a single taverna and a multitude of goats (“Goat Island” was also briefly considered as potential synonym for Astipalaia), the anchorage provided excellent protection from the Meltemi which had several yachts stranded there for three days!

I made a brief dash for Thera on day two but gave up battling the worsening conditions after a pod of dolphins made it quite clear that it was wisest to head back the other way. On day three I tried again (yes I’m know to be stubborn), but when neighboring boats returned from their attempted departure, and Eileen started dragging an anchor (many thanks to the English crew whose shouts from the Taverna brought that potential disaster to my attention), I resigned myself to remaining another night.

Besides, there’s always plenty of maintenance to do on Eileen of Avoca, mending sails, polishing brass and in this instance unclogging the head!