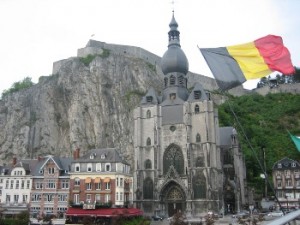 I had read that the canals would take me through some of the prettiest countryside in Belgium and France and this was largely true as many of my photographs will attest.

But I also saw some of the ugliest industrial zones, junkyards and nuclear power stations in central Europe.

It turns out (not surprisingly) that traveling on a canal is much like driving on a highway. 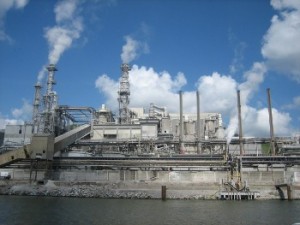 The banks are usually raised (limiting visibility) and even when they are low, the vegetation often restricts views of the surrounding countryside. Following these waterways often frustrated me, (mind you I’m easily miffed), but I’m now claiming that no sailing vessel should suffer the indignity of canal travel for too long. Being chained to the tiller hour after didn’t help to endear them to me and when it rained (which it does quite often in the Lorraine district) I felt and looked miserable.

Enough complaining…. on the plus side, I’ve come to know towns I’d never have thought to visit and found many to be truly splendid. The slow pace gave me time to appreciate what I saw and to unwind (between torrential downpours!). Once the dreaded locks were mastered (lets say… managed without too much anxiety) they served more as a welcome distraction rather than the hurdle they had seemed at the start of my journey. The best bit was being able to invite my landlubber friends for a great weekend without worrying that they would be bored or seasick.

The routine for Belgium is similar, just replace the sections about the remote control with… “Gesticulate frantically with the lock-keeper” and “suffer disdaining looks from the commercial traffic operators” where appropriate. 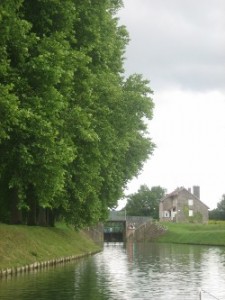 Note: Locks beyond the Meuse were largely activated by turning a pole hung on a wire stung across the canal. Locks closer to the Mediterranean were enormous and these obviously had operators. Near Epinal, students on their summer vacation operated the manual locks for a bit of pocket money. Cute!3.

Each lock is unique. Just when you think you have a routine sorted out you undoubtedly find yourself in one with an unusual configuration and nowhere to make fast. A Yarmouth 23 is tossed about quite thoroughly by the turbulence in these locks (especially if you are near the front gates of a rising lock). On occasion it required all my strength to prevent Eileen of Avoca from thrashing about. In hindsight it would have been much easier if I had stayed to the back and always insisted on being the last boat in.

1 At Givet (my first French lock) I paid my waterway fee and was issued with a remote control for activating automatic locks.

2 Quote from the movie The Great Race

3 More on this later