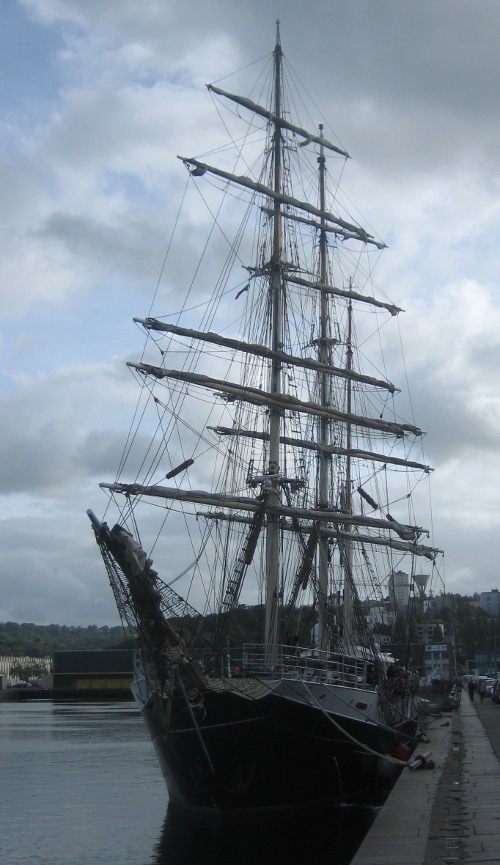 Leaving the Solent at the first available weather window, Eileen raced for France. Stiff northeasterly winds over a spring tide made for a lively crossing but a Yarmouth23 in Force 5 conditions or above is in its element.

Arriving in Cherbourg, I spent the next few days carrying out some thorough boat checks, as this was effectively Eileen’s first sea trial after refit.

Small issues abound, but none are show stoppers, so I’ll spare you the details and just go about sorting them out on route. I’m late enough heading south as it is and can’t afford to stay any longer in these northern latitudes.

I said my goodbyes to family and friends, took a few obligatory tourist photos of statues, churches and interesting boats, before making haste for Camaret (some 170NM away).

On the subject of interesting boats, above is a picture of a Swedish tall ship that arrived before noon. Despite my best efforts (often claimed by others to be somewhat half-hearted), to track down the young crew for traditional Nordic offerings of raw herring and vodka, I had to settle for an evening dining alone. Pork stew, some local red wine and only my plastic nodding dog for conversation. Woe is me… 🙂 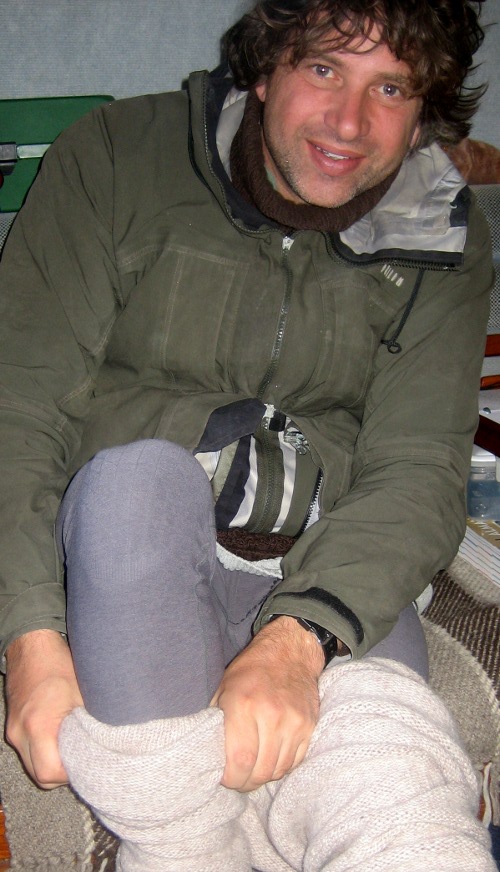 Things started to get a little more interesting on route to Camaret. With weakening Force 2 to 3 northwesterly winds, I motored from Cherbourg through moderate seas and on into the night.

Now you may wonder, what does one do, (from moment to moment) while sailing all alone for several days at a time.

Sailing blogs usually describe similar voyages as rough, uncomfortable, uneventful or with words to that effect, which really does little to shed light on what it’s really like out there, especially for an audience of landlubbers. Well, here is my attempt to demystify the going ons at sea during all those lonely hours.

Well, as close to nothing as is feasible. There is lots of work leaving (or arriving at) port with ropes to tend to, sails to hoist, fenders to stow away and auto-pilots to set, but that takes all of ten to fifteen minutes if you really try hard to savor the tasks and move with sloth-like speed.

So, what happens next?

My own strategy is to play around with my hand-held GPS making an indefinite series of unnecessary 3 degree course corrections at the tiller-pilot. I follow this up with occasional visits to the navigation table where I scribble brief log entries like so:

Moving about from one seating arrangement to another is also a favourite pastime of mine. My behind can really only take so many hours in any one position, so having a short lie down below deck with occasional “Jack-in-the-box” style getting up to look outside, features prominently in my “things to do at sea” repertoire. 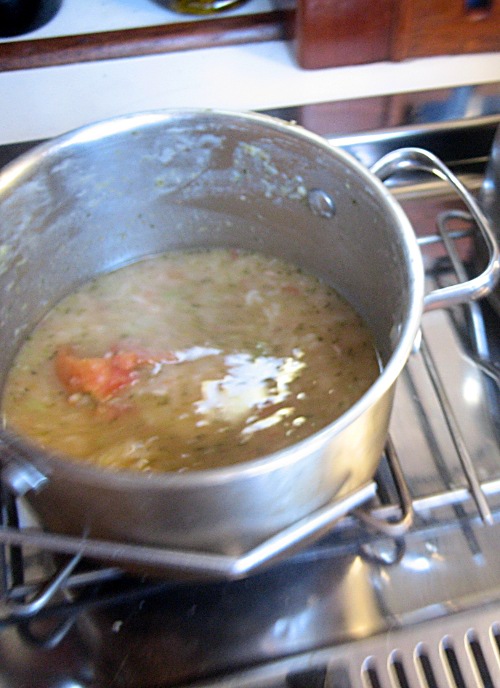 If it’s not too rough, I have a go at cooking… On route this mostly involves adding more of whatever I have (rice, potatoes, broccoli, or anything else that might go off soon due to the lack of refrigeration), into yesterdays unfinished stew, then boiling it to kingdom come. Kills anything that was attempting to grow in there of its own accord and keeps me warm. After several days, if I still think it might spontaneously crawl out of the pot despite regular high temperature disinfection, I add lots of hot chili or Indian spices for good measure. Let’s see what can live through that!

Ah yes, keeping warm, another great sailing pastime up north. As it gets late, surprise surprise, it gets cold, and I have to keep adding layers of clothing if I am to stave off pneumonia. Usually by 4am I am twice the girth I was during daylight hours and layered like a babushka doll!

So apart from the other two necessities in life, the physical gymnastics involved being a subject I’d rather not elaborate on, that’s it. No mobile phone, no “I’m just ducking out to the shops for a moment”, and no taking the dog for walks. Exciting isn’t it? Now you know why nobody usually bothers to write about it…

Having said that…. odd things do happen on route breaking the monotony.

Take that extract from my logbook detailed above. It’s 1:30 in the morning. There is no evidence of any shipping on my radar detector or newly installed AIS receiver when suddenly I’m called up on the VHF radio and ordered to identify myself to a French warship! Peeking out of the companionway I see the ominous grey silhouette of an unlit vessel to starboard and check my position on the GPS to see if it really is me they wish to talk with. Apparently it is!

It turned out to be little more than a check to see where I had come from, where I was going, and if everything was well, but it did have me worried for a moment. 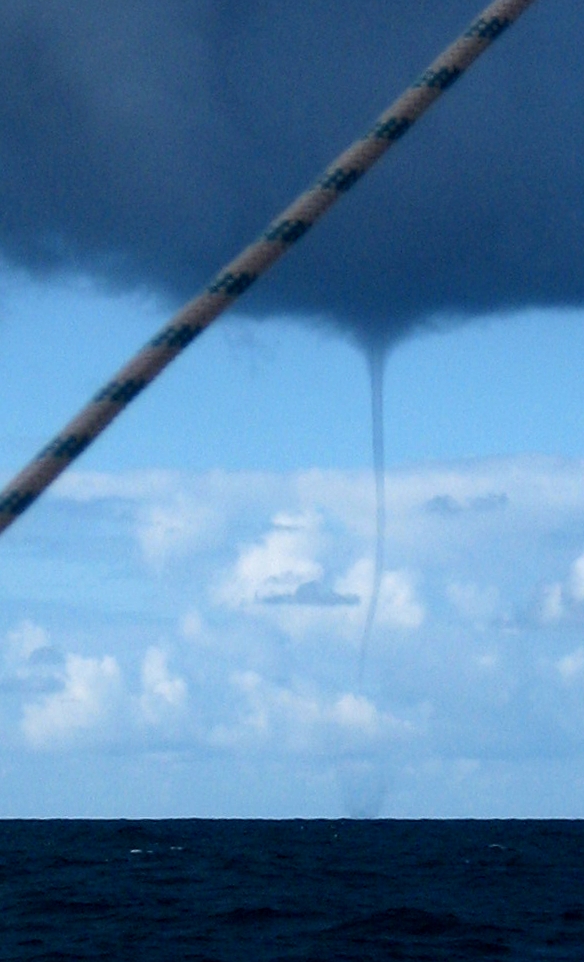 Water spout in The Channel

Oh, and I almost forgot to tell you about the tornado… Or should I say, waterspout (to be technically correct). That beast passed within a mile of Eileen earlier in the afternoon…

There I was, just three miles NW of Alderney, when a solitary dark cloud started producing twisters in what was until then, just a beautiful sunny day!

I didn’t think these things happened in the Channel. I had enough time to take a couple of snapshots, with my camera, but you will have to excuse me for not waiting for a better closeup. I had a few details to tend to before it reached me: Getting my sails set for storm winds and battening down the hatches for starters. Just when I was ready to go below and tell my newly dubbed plastic nodding dog “Toto” that we might not be in Kansas anymore, the monster unwound itself and disappeared. Freak weather anomaly and untold boating episode from “The wizard of OZ” over in a matter of minutes.

To my great relief I did nothing more than the “nothing” described above for the remainder of my trip to Camaret.