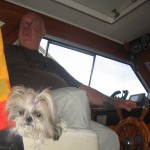 Cristian (The one with less hair)

I feel that one last post on traveling the inland waterways is warranted as my previous comments appear to paint a bleaker picture than reality. As with any lengthy journey there are ups and downs and one of the ups was the time I had to make friends.

It was with great pleasure that I’d catch up with Cristian and Babette from Carpe Diem on my weekend marathons as they took their more leisurely journey to the Mediterranean. 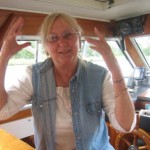 I still miss the numerous pleasant evenings we had catching up on canal gossip over drinks and a meal in quaint riverside marina cafes.

Cristian and I would talk about boats, interrupted with frequent allusions to how many fish he had caught in my absence, while the girls….. hmm now that I think about it… I have no idea what the girls would chat about. 😉

Another truly memorable experience was meeting a local of Fontenoy le Chateau.
I’d woken up before sunrise to drop off my crew at the train station in Epinal. Upon my return I met a local fisherman and we exchanged greetings before I returned to my boat to make a cup of coffee.

It was a fairytale misty morning but still rather chilly. As I poured my coffee (fortified with a dash of Amaretto) I thought to make a second and offer it to the fisherman. I made my way back to his camp and he readily accepted the cup (especially when I hinted that its content was somewhat strengthened!).

What followed was a very pleasant chat about fishing, the history of the area and his work in a cordage factory. I had very little to contribute to the conversation but he seemed happy enough to have an attentive ear. As he prepared to leave I was taken aback when he insisted I take a beautifully spliced rope he had made for towing. It now has pride of place in the pulpit and serves admirably as part of my ground tackle.